Startup LumiSands is developing phosphors from silicon nanoparticles, hoping eventually to replace the rare earths now widely used in LED phosphors with materials based on cheaper, greener, and abundant sand.

A recent PhD and a doctoral candidate from the University of Washington have been working for more than a year to refine and scale up the processes for producing fluorescent nanoparticles based on silicon. The idea came out of Chang-Ching Tu's graduate student project. Tu earned a doctorate in electrical engineering at UW and stayed on as a postdoctoral researcher in materials science and engineering. He worked with graduate student Ji Hoo on the nanoparticle process, and this spring the two spun out LumiSands with the support of the UW Center for Commercialization. 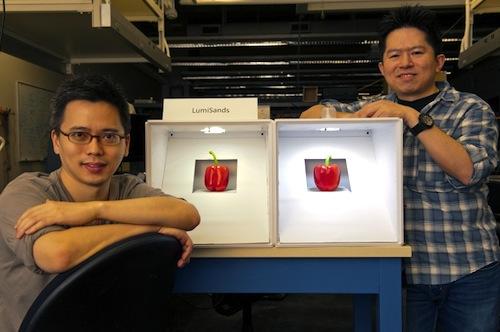 LumiSands co-founders Chang-Ching Tu, left, and Ji Hoo with with a demo showing the warmer hue of the LED bulb (left side) that activates a film embedded with their red-emitting silicon nanoparticles. The box on the right has an identical, standard LED bulb.
(Source: Mary Levin, UW)

Bulk silicon does not exhibit fluorescence, but when its crystalline particle size get small enough, below 5 nanometers, the element can emit light. To make small enough particles, LumiSands etches off nano-sized particles from wafers of silicon. The particle size determines the light frequency, and Hoo told me that the size is easy to control since it depends only on the amount of time spent with the etching fluid. Initially LumiSands is working with particles sized to emit red light; the founders have produced other colors in the laboratory and believe that a wide range of silicon-based phosphors will eventually be practical.

The traditional phosphors that LumiSands hopes to displace are based on rare-earth elements such as yttrium and neodymium. Rare earths are hazardous to extract and process. They are expensive and their price is unpredictable, because China controls over 95 percent of the production for these elements (though both the US and Japan are scrambling to get their own production ramped up).

The economics of it
In an interview, I asked Hoo how much an LED manufacturer might be looking to save by using LumiSands's eventual product based on silicon. He said it was impossible to generalize, but gave one concrete example. If an LED maker is now spending $2 per chip for Intematix's remote phosphor ChromaLit, Hoo estimated that a LumiSands replacement might cost only $1.

The company's experiments are mostly in a remote-phosphor configuration, but Hoo said the long-term vision for the company is to produce materials that LED makers could substitute directly for rare earth-based phosphors whether local or remote.

I wondered how efficient the nano-silicon phosphors are when compared to the more mature rare-earth products. Hoo replied that traditional phosphors at the low end of the market might be 70 percent to 80 percent efficient in converting the frequency of incident light; at the high end, efficiencies can exceed 90 percent. LumiSands is now at 40 percent to 55 percent, having progressed in a year from 20 percent efficiency when they set out. Hoo is confident that viable commercial products will result in time.

The company is reported to be in conversation with major players in the lighting industry. I asked Hoo if he could characterize the level of these discussions. He said that they are talking to "a couple of depths" in the industry at this point, from LED makers to lamp manufacturers to vertically integrated lighting companies.

What questions or concerns do you have about LumiSands's approach and prospects? We'll see if we can entice Ji Hoo to join the discussion and provide answers.