Are we experiencing a rash of thefts of LED lights? Looks more like a rash of speculating about such thefts.

We briefly mentioned a report from Chile a couple of weeks back; it seems that somebody made off with 40,000 LED light bulbs, worth $100,000 (why so little?), from a warehouse. The original reporting was by the Christian Science Monitor, and the story was picked up across the blogosphere but not developed any further. Chilean police are investigating. 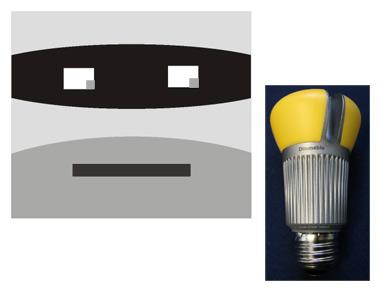 And as for any reports of large-scale LED thefts, that is pretty much it. We can find lots of evidence online of people worrying about LEDs being stolen, from motorcycles and theaters for example. One guy posted a video of himself fuming after four new LED bulbs were swapped out for compact fluorescents in what appears to be an office (or possibly an apartment building).

The links in the preceding paragraph are all one to two years old. LED bulbs cost a good deal more in 2011, and were far more rare and exotic. This article in a truckers' specialty publication indicates that theft of LED lights from drivers' rigs was a regular problem, 18 months ago.

The fact that someone filed a patent application for "Systems and methods for prevention of theft of LED light bulbs" -- in January 2011 -- indicates that there may have been a problem in preceding years. Or that the inventor was anticipating a problem. (The patent has not been granted.)

Fanning the flames
A few days back, a lighting specialist at Leapfrog Lighting penned a speculative piece, mostly hanging from the Chilean theft, on the theory that rising energy prices worldwide were behind a rash of LED thefts. Another data point cited: a one-liner in The Telegraph (UK) claiming that a poll had found that 57 percent of visitors to hotels (in Britain? it doesn't say) admitted to having stolen light bulbs from hotel rooms. Not exactly a scientific survey; and at any rate people have been filching (mostly incandescent) light bulbs from hotels for a very long time, along with towels and bibles.

The Leapfrog writer does not advance any evidence that rising electricity prices are responsible for an upsurge in the incidence of LEDs going missing.

I frankly don't believe there is a big problem simmering here. LED prices are falling, and within a few years' time there won't be much incentive left to steal them. Unless some light-fingered miscreant simply needs a light bulb to replace one that failed.

Have you seen any evidence that theft is an issue?