This week: light from a thread, testing LED lamps' claims in the UK, and subsurface lighting for paddleboards.

Keeping bad LEDs from driving out the good
In England, members of the Lighting Industry Association complained about products on the market there that have not been meeting the specs they promised, and are damaging the credibility of the whole industry. The LIA worked with the UK National Measurement Office to get a testing regime set up. The program will test "between 50 and 60 lamps of various types, with 20 of each being purchased in the marketplace from a number of sources." The NMO has a number of sanctions and penalties available for any product found not to live up to its billing.

Dim lights found to spark creativity
In a series of studies (abstract here), researchers in Germany have demonstrated that dimming the light in the workplace can stimulate a "global and explorative" style of problem-solving, which can result in enhanced creativity. Other phases of work benefit from a more linear and analytic approach, which brighter light encourages. The researchers conclude that the best results will be obtained when the employee has control over their own lighting, and can dial it to suit the task, as we discussed here recently. 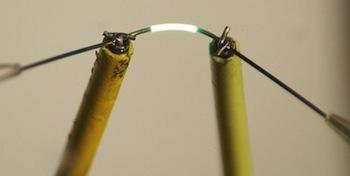 Thread becomes a functional OLED emitter
Researchers in (again) Germany have managed to vapor-deposit the seven layers of a functioning OLED device onto a glass thread (see image). The accomplishment conjures fantasies of self-glowing fabrics woven from OLED thread, but the current research is a long way from that scenario. First of all, the glass thread was half a millimeter in thickness. The researchers are going to have to figure out how to accomplish the same trick on a far thinner and a more flexible thread, such as polyester. The lifetime of the OLED emitters is limited. They will have to be protected somehow from moisture and oxygen. And they will have to bear up under currently unsustainable stresses from weaving and indeed from the fabric being worn on a moving body. 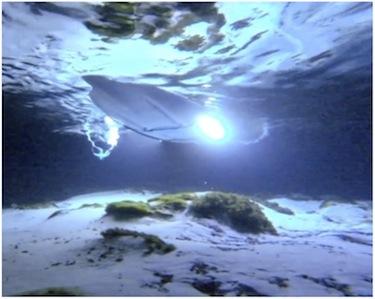 LED lighting for paddleboarders
Ecologically speaking, this just seems like a really bad idea. A company called Nocqua is selling LED lighting for mounting underneath paddleboards. Here is the product page on Nocqua's site. Two waterproof light bars, for a total of 144 LEDs, and a two-hour Li-ion battery produce 2,000 lumens to delight the human eye and wreak havoc on every marine ecosystem in line of sight. The Nocqua 2000 system can also be fitted onto kayaks and canoes, for handy disruption of lake, pond, and river ecosystems as well. It costs $400.