This week: annoying LED street lights, some gift ideas for the lighting geek on your list, and patents for phosphors.

Intematix gets patents for phosphors
It looks like Intematix may have jumped the gun slightly with a Sept. 24 press release touting its two newly issued patents for GAL phosphors. That's because the US Patent & Trademark Office granted them another one on Sept. 25 for red nitride phosphor. The company says its phosphors have been used in LED designs with a CRI of 98 and higher.

Anybody familiar with how the IP battles have been playing out so far in the area of phosphors? It seems like we may be entering a new season of saber rattling, court filings, and eventual cross-licensing.

A foldable, stretchable, transparent OLED
We've had a good deal of OLED news lately, and here's one more development. It relates not to lighting but to display. Researchers at UCLA have demonstrated a transparent OLED can be repeatedly twisted, folded, and stretched at room temperature while remaining lit and returning to its original shape.

The emission material, 5×4.5 mm in size, includes "a single layer of an electro-luminescent polymer blend sandwiched between a pair of new transparent elastic composite electrodes... [consisting of] a network of silver nanowires inlaid into a rubbery polymer."

LED street lights annoy an expert
Christchurch, New Zealand, is replacing its warm orange sodium street lights with LEDs that are high and cold on the color temperature scale. Lighting designer Kevin Cawley is not at all happy about that. "We are not lighting Christchurch warmly," he told The Press of New Zealand. He tried to get city officials to consider more expensive tunable LEDs, which "could be dimmed and the color changed with the seasons and weather," but the city fathers were having none of it. 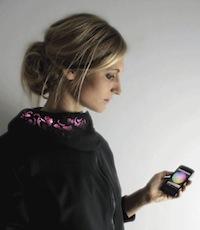 Tech is the new black
Is it too early to worry about holiday gifts for the lighting geek on your list? I thought not.

Here's a line of women's clothing with built-in LEDs. The LEDs (said to be wearable and comfortable) are controlled by a smartphone app. Please remove the LEDs before washing. (Here are some more photos.)

If that's not your cup of tea, then try a pair of reading glasses with LEDs in the temple pieces. They cost about $26.50, or £16.49 for those who are in the UK. Shipping to the US might be prohibitive.

Or how about a 40W replacement bulb that's also a flashlight? It features a rechargeable battery in the telescoping base and provides three hours of light off the mains. It's available exclusively at the Museum of Modern Art in New York for $45.