This week: Dealing with phase-cut dimmers, deep daylight harvesting, and a commercially available module at 203 lumens/Watt.

Efficacy watch: 203 lm/W via remote phosphor
Phosphor maker Intematix and Philips Lumileds (sponsor of this site) have announced a lighting module that delivers what the companies believe is the highest efficacy so far announced in a commercially available product: a 6,000K, 70-CRI version achieves 203 lumens per Watt. The module uses the Lumileds Luxeon T/TX family of royal blue LEDs and a 26mm, dome-shaped remote phosphor. It is available in color temperatures from 2,700K to 6,000K with CRI values from 70 to 98.

Intematix says that remote phosphor solutions can deliver high-quality, uniform, and omni-directional light. And my understanding is that remote phosphor configurations can result in higher efficacies in general, and may also offer enhanced lumen and color maintenance. I haven't come across rules of thumb or qualifiers to those statements; if you can provide any insight, please do so in the comments. 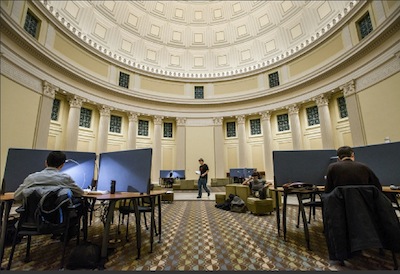 The MIT dome's retrofit
MIT undertook a project to refurbish its iconic dome, which sits atop a building constructed 97 years ago. The project was completed early this year, but it is back in the news now because of renewed attention to the LED lighting angle in the story. The interior of the dome was cleaned, painted in what research revealed to be the seven original shades of off-white, and washed with LED light from Lumenpulse Lumenfacade fixtures in a design by Boston-based firm Sladen Feinstein Integrated Lighting Inc.

I found the rest of the story of the dome renovation compelling as well, particularly the account of reconstructing the 27-foot (8.2m) oculus or skylight. The renovation brought natural light to the Barker Library reading room below for the first time since 1942, when the oculus was blacked out due to the war.

DOE report on phase-cut dimmers
The US Department of Energy's Energy Efficiency and Renewable Energy program has come out with a new Gateway report titled "Dimming LEDs With Phase-Cut Dimmers: The Specifier's Process for Maximizing Success." It describes a step-by-step process for arriving at the best assurance possible that a chosen lighting configuration will work as intended with whatever dimming methodology the project is faced with -- as the report's authors put it, "to improve the odds of achieving good dimming performance." They caution: "It is not a simple undertaking: specifiers should be prepared to spend considerable time and effort in this task."

Deep daylight harvesting
The above is my term for a new technique to bring daylight deep into the interior of buildings. The inventors of SmartLight, two University of Cincinnati researchers, note that the technique is far more efficient than capturing sunlight with photovoltaics and then generating light with the resulting electricity. The technique relies on a grid of small electro-fluidic cells, self-powered by embedded photovoltaics:

Each tiny cell in the SmartLight grid contains fluid with optical properties as good or better than glass. The surface tension of the fluid can be rapidly manipulated into shapes such as lenses or prisms through minimal electrical stimulation -- about 10,000 to 100,000 times less power than what is needed to light a traditional incandescent bulb. This allows sunlight passing through the cell to be controlled...

The researchers believe this technology could be game-changing, reorienting the way we light buildings. They are trying to raise "substantial funds" -- we're talking well beyond Kickstarter here -- to attract industry or government partners.

Here is the University of Cincinnati press release, which has additional details and links.