Light From All Directions

Announcements from two lighting giants underscore the coming ubiquity of LED light. Philips is partnering with a carpet maker, while GE is teaming up with a manufacturer of ceilings and walls. 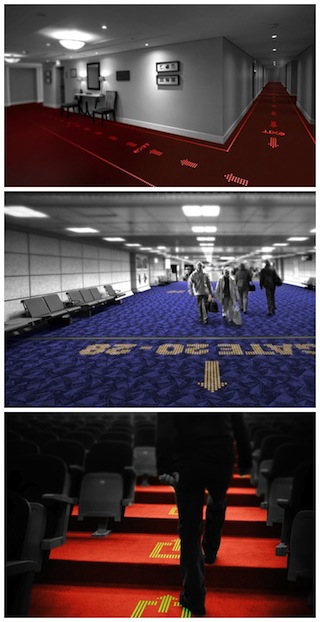 I'm sure the timing is coincidental, but this week brought news of the partnerships between Philips and the carpet maker Desso to develop light-transmissive carpet and between GE and USG Corporation to deliver lighting integrated into ceilings.

Below
The Philips-Desso partnership, which will launch a product (and reveal its name) next year, seems mostly to envision applications for carpets with addressable LEDs built in the areas of signaling, display, signage, and safety (as suggested by the illustration). But the wording of the press release certainly leaves open the possibility of other creative uses, from artistic expression to entertainment to interactive environments to general lighting.

To the sides
Such possibilities were well explored in the Philips partnership with Kvadrat Soft Cells, a company with expertise in fabric coverings and acoustic materials. That partnership, announced in 2011, produced controllable and potentially interactive wall displays that can be changed to set a given mood in spaces devoted to entertainment, hospitality, or public meetings. (See the video embedded below.)

Imagine an environment in which the illumination (and the visual interest) are in the floor and the walls -- perhaps a space for performance, artistic display, or dance.

Above
GE's partnership with USG is strictly about illumination integrated into ceilings. However, USG manufactures material for walls, as well, so there is room for horizontal expansion.

GE's Lumination LED Linear Recessed Luminaires, mentioned in the announcement of that partnership, seem to be competitive with the JLC Tech T-Bar SmartLight we profiled last summer. JLC Tech in turn has partnered with the ceiling manufacturer Armstrong to offer seamlessly integrated lighting.

Of course, when talk turns to lighting integrated into architecture, thoughts turn to OLEDs. But LEDs seem poised to get there first in affordable, shippable products for varied applications.