Crime-fighting street lights in Glasgow
The Scottish city is trying out (they would say trialing) street lights that "record noise and movement so disturbances can be fed back to the emergency services," Lighting.co.uk reports. The lights could be used to monitor pollution or footfalls, the council implementing the trial said, and they could be programmed to increase in brightness or to flash as a marker for emergency responders. Lights along a cycle path could brighten as a cyclist approaches and dim behind him to save energy.

The head of Living Streets Scotland generally welcomed the idea. However, "we would question... why these new street lights should automatically get brighter or start flashing in the event of increased noise -- that would perhaps only encourage a bit of midnight merriment."

Cree adds 1,100-lumen A19
The company that broke the $10 barrier for LED bulbs in an A19 form factor (at 450 lumens) has introduced an 1,100-lumen omnidirectional bulb intended to replace a 75-Watt incandescent. It's offered in either 2,700K or 5,000K color temperature; the latter costs about a dollar more per bulb. The CRI is 80, and the bulb is dimmable.

Cree's usual 10-year warranty applies. The bulb consumes 13.5 Watts, for an efficacy of around 84 lm/W. This is the same as the company's 800-lumen (60-Watt replacement) bulb, which was Energy Star certified a few months back, leading one to assume that the new bulb will be blessed by Energy Star soon. 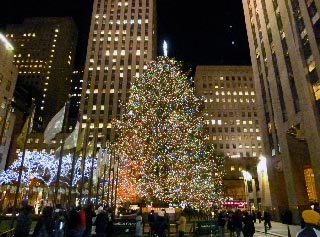 New York's 45,000-LED Christmas tree
By now, pretty much everyone has seen photos and footage from the lighting of the Rockefeller Center tree in New York last week. Here's a time-lapse video encapsulating the arrival, raising, decorating, and lighting in 62 seconds. And here is a photo from 1931 showing the first tree erected at Rockefeller Center. The workmen are queuing up for their pay envelopes under it. 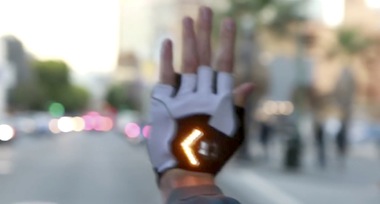 LED bike turn signal gloves
This brand-new Kickstarter campaign has just about the most professionally prepared video I have seen on the site. The product is quite appealing, too. Zach Vorhies, an engineer working for Google in San Francisco, quit his day job to manufacture Zackees, gloves with turn-signal indicators in the backs that are activated by a simple gesture. He is seeking $30,000 in this campaign, which goes live sometime today (Monday, Dec. 9).

We have sometimes covered automotive lighting here, but bicycles are less commonly seen. This application qualifies as indication, not illumination, and I hope you will forgive me the enthusiasm for it.