This week: lights that play music, lights that smell nice, and a lighting makeover for the Gateway of India. 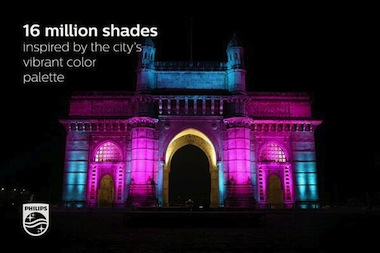 Color Kinetics lights up Mumbai's Gateway of India
Last week, the iconic structure in the Indian city of 12 million got a makeover in 16 million colors. Philips worked with the local tourist authority, MTDC, to design lighting in keeping with the architectural features of the popular tourist destination.

For many more photos of the opening ceremony, captured by onlookers, search Twitter for the hashtag #MumbaiInANewLight. This social media channel also provides a way for Mumbai residents to suggest creative ideas for lighting the Gateway.

The press release notes that Philips has lit many other one-of-a-kind architectural landmarks as well, including a few we have discussed: Vietnam's Dragon Bridge in Da Nang (see Future of Light), New York's Empire State Building (

BeeWi Smart Color LEDs
Here is a controllable LED lighting product that slipped under the radar at the Consumer Electronics Show earlier this month. CNET's review asks rhetorically whether BeeWi could be the Hue competitor we've been waiting for. Like Hue, the bulbs produce 16 million colors; they are also significantly brighter, 850 lumens to the Hue's 600. And they cost $40 per bulb; Hue is $60.

BeeWi is a somewhat tongue-in-cheek European company known for its Bluetooth-powered toy robots, helicopters, headphones, and speakers. The company's lamps are controlled via Bluetooth, not the ZigBee that Hue employs. This means that you can control the first bulb without a gateway. With Hue, you need the gateway, and it's only sold in a kit with three bulbs for $200. But BeeWi has another trick up its sleeve: It supports an optional gateway, which translates Bluetooth to WiFi for extended range. (CNET doesn't mention a price for the gateway.) 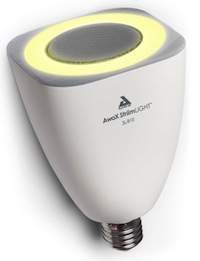 None of the lighting products show up yet on the BeeWi website. They will be available, the company claimed at CES, within a quarter, in time to compete with iLumi and many others in this dynamic space.

These bulbs play music
AwoX StriimLight bulbs contain a built-in, 10 W speaker. (It's surprising that BeeWi, above, didn't come out with this product.) The StriimLight comes in two versions: the B-10 has a Bluetooth speaker, and the WiFi has (natch) a WiFi speaker. The B-10 will cost $99 and will be available later this month. The WiFi version is slated for the second quarter, and no pricing was announced.

These bulbs smell
Now they're just messin' with us.

The La Flowra series of LED bulbs from Taiwanese maker Macroblock incorporates a removable aromatic component powered by the waste heat from the LED's heat sink. LED Inside quotes a Macroblock spokesman as saying that the aromatic component took as long to design as the bulb: six months each. Aromas of roses and stock are offered -- chosen, the spokesman said, because essential oils for these scents are available more affordably than others. The bulbs will cost ¥4000, or about $38.32 each. The company is targeting markets such as hotels and spas.