The company refers to these arrays, which aim for lots of candelas per dollar, as "high-density." Other products in Cree's lines of emitters, as well as products from much of the rest of the industry, are focused on achieving high lumens per dollar. 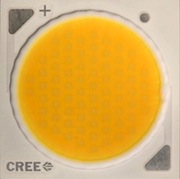 It's about punch
LEDs Magazine works through several comparisons of prototype light engines built on the new high-density arrays as compared to legacy sources. Cree assembled an engine based on the 6-mm CXA1310 that puts 31,000 cd in the center of a 9° beam. A Cree spokesman gave LEDs Magazine a rundown of BOM cost (about $34) that suggests the value of the high-density array in this highly directional application. The spokesman said the very best PAR20 ceramic metal halide lamps achieve a CBCP only near 20,000 cd.

Not to be left out
Soraa also had a high-density announcement, though it doesn't use that term in its press release. The company is touting an AR111 lamp, based on its GaN-on-GaN LED technology, that will generate 27,500 cd at the center of an 8° beam of light at 95 CRI and 95 R9. The punch is not quite as high as Cree manages from its new COB arrays, but the quality of light may be better. (I didn't see an R9 value for Cree's offerings.) The Soraa AR111 lamp also works in fully enclosed fixtures, which I believe is not true of Cree's XLamp LEDs.

If it were not for Cree's earlier announcement, Soraa's might have received more attention for the CBCP breakthrough it represents.