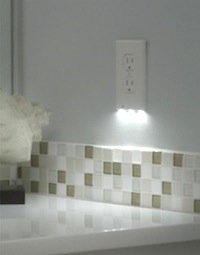 How to Kickstart
Three gentlemen in Provo, Utah, invented an LED night light built to look like a standard electrical outlet cover plate. It installs in seconds with no electrical expertise required, and it uses five cents of electricity per year. The principals of Snap Power spent four months designing their Kickstarter pitch and went live asking for $12,000. They made that goal inside of two hours and broke $100,000 in just over a day. At this moment, almost $243,000 has been pledged by more than 4,700 backers, and the pitch for the SnapRays Guidelight tops the Kickstarter most-popular page.

The Guidelight has three LEDs and draws 6 milliamps when lit (about 0.2W per LED). The LEDs will "last for at least 25 years before they begin to dim," Snap Power says. Kickstarter backers will pay $8-$12 each for SnapRays Guidelights in packs of 3, 5, or 10. There's no word on the CCT; I would hope the light has a good deal of red in it to preserve night vision, but from the illustrations, it doesn't look like that is the case.

Apple investing $1 billion in sapphire
Last November, Apple and GT Advanced Technologies announced plans to put $1 billion into a new sapphire plant in Mesa, Ariz. Yole Dévelopment has published a study of the implications of the massive plant, which Yole believe could be supplying double the current world output in sapphire by the end of this year.

The speculation is that Apple may be moving to sapphire face plates for iPhones. (Sapphire has been used in luxury phones, costing more than $1,000, for years.) Yole's analysts can't make the scale of the Mesa plant work if all the sapphire goes for lens covers and home buttons. They estimate that such face plates (finished and polished in China), could cost Apple $15 each initially, moving to $13 over time.

Yole says that, even if the widely rumored upcoming iWatch device used a sapphire face, Apple could still tap the supply chain to get enough sapphire.

Compound Semiconductor's excerpt from Yole's report, linked above, also has a chart summarizing where the various LED manufacturers are in their exploration of GaN on Si, if anywhere at all. Yole says that sapphire will continue to dominate the LED substrate market, accounting for 90% of it through 2020.

Powering and controlling LED lights over speaker wire
Low-voltage power for LEDs has certain attractions. The wiring can be lighter, greater conversion efficiency can be possible, and costs can be lower in a central supply/driver that powers multiple luminaires than if each one has its own electronics on board. The driver circuitry is well isolated from LEDs' heat, reducing concerns about shortened lifespans. 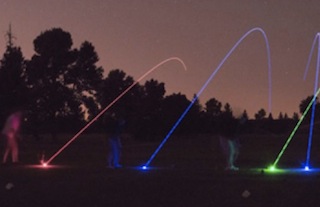 LumaStream is touting its low-voltage solution that can power up to 24 LED fixtures up to 200 feet (61 m) from the power supply, using thin-gauge, low-voltage wiring. The same wire controls and dims the LEDs. The company is working with the German fixture manufacturer ELPRO to offer solutions to retail and restaurant applications, initially in Europe and expanding to the US.

Golf in the dark
The makers of this LED-lit, motion-activated golf ball say it "provides the high performance aerodynamics, control, accuracy, feel, and distance you expect from a professional quality ball." Not sure about that, but it does light up when hit (in red, blue, green, or white) and stays lit for eight minutes. A pack of four costs $30 with free shipping in the US. Battery life is 40 hours, and somehow I doubt that the batteries are replaceable.