dotLEDs Are Built for Wearables

Plessey is introducing white or blue "dotLEDs" in a 1005 package, 1 mm by 0.5 mm in size, that could do nicely in wearables until OLEDs become affordable.

The company is producing dotLEDs in England using a proprietary GaN-on-Si process it brands as MaGIC. The surface-mount devices have a thickness of only one-fifth of a millimeter. 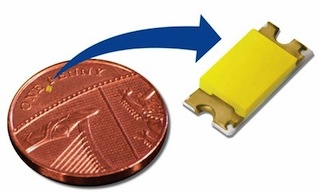 They are designed for applications that demand low-profile electronic components. They can be used in backlighting, as indicators on personal electronics, or as pixels in minuscule dot-matrix displays. But Plessey is pitching the dotLEDs to the wearables crowd.

The illustration to the right gives a sense for the size of these things. Here is another perspective: You could pack six or eight of them, mounted flat, on the head of a pin. If you placed them edge up, you could stack 30 or 40. (Plessey also makes blue LEDs, 200 by 200 μm, of which more than 300 would mount flat on our pinhead.)

Pour 5,000 dotLEDs into a pile, and they will weigh about as much as a penny.

Each Plessey PLW138003 produces 0.7 lm of white light. The data sheet doesn't give a CCT -- just x,y coordinates in CIE color space. The viewing angle is 130°, and they can be driven with about 5 mA of current at 3 Vf. 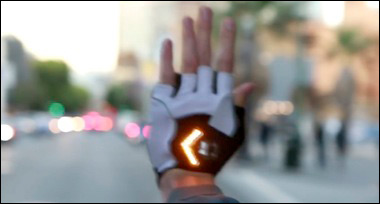 The fact that the PLW138003 is "a standard electronic component size, handled by the common surface-mount machines used in high volume consumer electronics" won't do you a lot of good if you intend to sew it into a glove. Wiring, driving, and powering these devices in a wearable context seem like formidable challenges to me, but I'm no expert in this area. Perhaps these are solved problems.

As blogger Dennis McCarthy noted on our site this week, OLEDs will eventually be the big noise in wearable electronics. Currently they cost 20 or more times what inorganic LEDs do, and their efficacy doesn't come close, but vigorous worldwide research is projected to close those gaps sometime in the 2020s. Until then, if you want LEDs in your clothing for whatever reason, Plessey's dotLEDs could fill the bill.