Many have thought of combining solar power and LED lights to bring relief to off-the-grid Africans. Here are two projects that may have a better prognosis than most.

We have written a good deal about the various, mostly Western, attempts to bring light to the Dark Continent -- using gravity, solar power, micropayments by cellphone, and other methods. 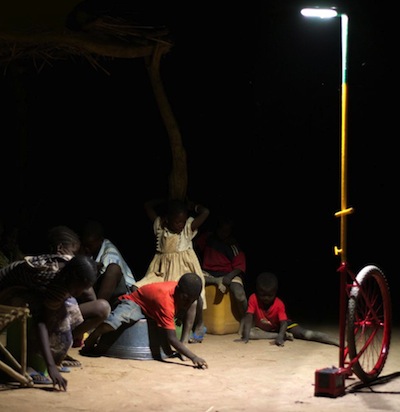 Two issues keep most of these ideas from having the impact their creators hope they will. Most of them are the fruit of Westerners bringing their First World points of view to bear on Third World problems, and most of them don't give sufficient consideration to the problem of how they will scale.

Two lights-for-Africa initiatives in the news recently address these issues head on.

Foroba Yelen lamp
This innovative light, invented by the Italian architect Matteo Ferroni, was inspired, as so many of its sibling solutions have been, by the experience of being "cracked open" by Africa -- in his case, by rural Mali. In a Works That Work post, Suzanne Wales attributes that expression to the British Africa expert Richard Dowden, who noticed that, when a traveler gets to rural Africa, "life's basic demands become more immediate: everyday acts such as work, celebration and education depend on the availability of essentials such as water, light and food, items whose acquisition... is rarely straightforward."

Ferroni wanted to help, but he wanted a solution that would work within the Malian culture, which is structured very differently from those in the West. The rural villages cohere as networks of collectives made up of traditional cultural roles: young people, women, agricultural workers, storytellers, healers, etc. Property is owned in common, and the collectives work for the common good. Any solution Ferroni devised would have to fit into these patterns.

The Foroba Yelen (the name means "common good" in the local language), an easily transportable lamp on a post, is made mostly from local materials. Only the 15-watt rechargeable LED module needs to be imported. The lamp is designed to illuminate human activities -- births, butchering a cow, funerals, vaccinating chickens -- and not "public spaces" (the very concept doesn't exist in those cultures). It casts a circle of light analogous to the shade produced by a tree in the daytime, a common working and meeting place. 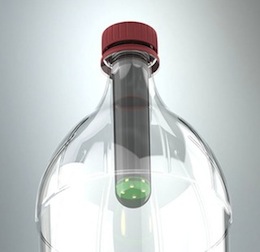 In the 12 Mailan villages where 56 of the Foroba Yelen lights are in use, they are owned by women's collectives. A chosen committee takes care of maintenance, recharging, and renting the lamps out to other villages and collectives. Ferroni's goal is to have NGOs and development organizations replicate the project across West Africa.

Lightie
This solar-powered LED lamp, invented by the young South African entrepreneur Michael Suttner, fits inside a standard 22mm PET soda bottle. With a projected cost of less than $10, it produces 12 times more light than a paraffin lamp without the safety and health drawbacks.

Suttner produced a prototype of the Lightie in October and entered it in a number of design competitions. He won in all of them.

He hopes to have the light distributed right alongside Coke around the world, and he is in talks with the Coca-Cola Co. to that end. Distribution problem: solved. Now to scale the manufacturing.