This week: a road that glows in the dark, a minimalist lamp shade, and landscape lighting with wireless control. 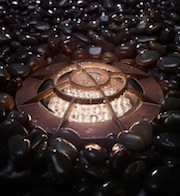 A Bluetooth-controlled LED outdoor luminaire
The fashion for wirelessly controlled lights is spreading. Kim Lighting, a subsidiary of Hubbell, offers what it claims is the first Bluetooth-controlled landscape lighting. The LightVault 8 fixture is installed in-grade and comes in a variety of housings for spot, wall-wash, or narrow flood applications requiring up to 2500 lumens. The light engine is sealed against water, mud, and dust.

You download the LightVault 8 app to your Android or iOS smartphone to control "field aiming and dimming." The dimming is 100% to 20% in 1% increments. The aiming (±15°) apparently works via a built-in motorized platform. There's a video on the Kim Lighting site.

The accuracy of color-changing LEDs
CNET's Ry Crist looked a little deeper at the light produced by the Philips Hue and the Tabu Lumen bulbs, using a spectrometer -- unnamed in the article, but it was a StellarNet Spectroradiometer. He plotted the two bulbs' results on a chromaticity chart when they were asked to produce red, yellow, blue, and green, and compared the color-changing bulbs to colored incandescent party bulbs. 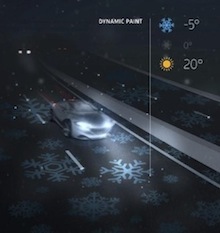 The overall conclusion: the Lumen comes closer to producing accurate pure colors than the Hue, which is especially deficient in green, despite its lime LEDs. But the Hue is superior at mimicking an incandescent by staying on the Planckian locus.

Netherlands experiments with glow-in-the-dark roads
The scale is too small to call this a pilot project. It's 500 m of pavement on the N329 highway in the Netherlands. This stretch has no external lighting; instead the roadway itself provides the light. The surface is painted with a mixture of paint and bio-luminescing powder, which stores energy from sunlight and emits a soft green glow after dark. The illustration on the left alludes to a speculative feature, not present in the trial: the shape of the roadway illumination could change with environmental factors such as the temperature.

I don't know how well an arrangement like this would work in New England, where the roads spend part of the winter under ice.

A shade lamp
When viewed from the proper angle, this LED-powered lamp projects the illusion of a lampshade silhouette on a nearby wall. Looks like it might produce an effective 50 or 100 lumens. It's a piece of minimalist furniture that Gorodish would appreciate.