You don't have to be a Buddhist to reserve your spot at the Ruriden mausoleum in Tokyo.

All it takes is about $7400, plus $88 per month until you need the space, and your bones can rest in perpetuity in a charnel house festooned with LED-lit glass statues, with state-of-the-art lighting controls. 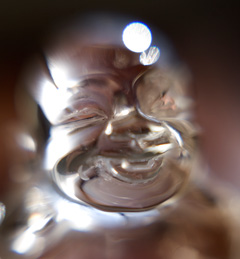 A recent story on JapanTimes.co.jp describes the mausoleum at the Kokoku Temple. One wall contains 2,046 small statues made of "ruriki" glass, each illuminated by an individually addressable, color-controllable LED. They are described as "Buddhist" statues, which may or may not mean statues of the Buddha; that's how I picture them.

There are no photos of the space on the web, which strikes me as odd, because it sounds impossibly photogenic in a somewhat macabre way. Picture a wall of small Buddhas, all glowing golden in a dark space. (It might be blue for a memorial service.) You approach a computer terminal and type in the name of your revered ancestor. One ruriki Buddha glows in a different color to mark the resting place being sought.

Family members are given an IC security card so that they can enter the facility off-hours.

Most of those who visit live in the neighborhood in central Tokyo, and aren't able to afford to buy a traditional burial plot in what must be some of the most expensive real estate in the world. Some of these people have relocated their loved ones' remains from the countryside to the mausoleum for convenience in visiting.

The chief priest at the temple, Taijun Yajima, is quoted: "We believe Buddhist ceremonies should change with the times and environment... as long as we can maintain a balance."

The article doesn't give any technical details about the LEDs used, of course. It does sound like the color is fully controllable, as well as the light level. Philips Color Kinetics would do the trick for such a relatively large-scale installation. Philips Hue would not be suitable because its ZigBee-based controller can run at most a few hundred lamps. It's possible the temple uses a local product that is not exported to the US. Japan has, after all, the highest penetration of LED-based lighting of any country in the world.