Nowadays you never hear about some new ultra-efficient building somewhere without the mention of LED lighting in the mix of the energy savings. Here are two examples: the first Whole Foods store in Brooklyn, N.Y. (said to be the most energy-efficient store in the country) and the new US embassy building in Helsinki, the first to be certified LEED Platinum.

Whole Foods
The Whole Foods store on the Gowanus Canal in Brooklyn covers 56,000 sq. ft. (5203 sq. m) at Third Avenue and 3rd Street. It is referred to locally as "Third and 3rd" (and on Twitter as #thirdand3rd). It has been open since December 2013, but seems to be making a PR push recently to tout its many green features. The store is Whole Foods' showcase for its participation in the Better Building Challenge, an initiative intended to make US commercial and industrial buildings 20% more energy-efficient by 2020.

The store has a greenhouse on its roof, where produce is grown for sale downstairs. The greenhouse structure cools the building in summer and is warmed by it in winter. I saw no mention of LED horticultural lights. Their use in a greenhouse environment seems to be a matter of research now.

The parking lot is lit by LED lights. These are powered by wind and solar generators on their poles. Other solar panels cover parking areas and generate 220 KWh for use in the store. Rainwater runoff is collected by the panels and directed to an underground 30,000 gal. (113,500 l.) tank. From there it is purified and used in the bathrooms and to water plants in the greenhouse.

The bricks from which the store was constructed are recovered from a demolished New Jersey warehouse. Wood from the Coney Island Boardwalk, dismantled after Hurricane Sandy, decorates some of the inside spaces.

The use of LEDs is not mentioned in the store proper. It makes sense that they would be lighting refrigerated and freezer cabinets, as well as providing overhead illumination. I was unable to get through to anyone at Third and 3rd to confirm. 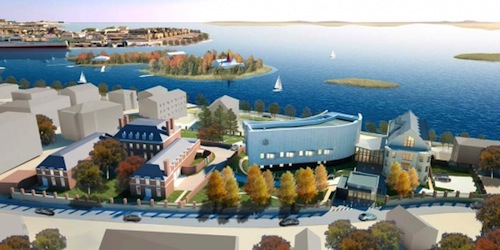 US Embassy in Helsinki
The Innovation Center in Helsinki, which houses the embassy's public buildings, is claimed to be the first embassy building to be certified LEED Platinum. It uses 46% less energy and consumes 30% less water than a baseline design. It is also "the first US diplomatic building to be equipped with 100% light-emitting diode and organic LED for interior and exterior lighting."

GE Lighting has a few images on its website of the GE Lumination luminaires used in the embassy project. The site of the project's architects, Page Southerland Page, features more photos of some very imaginative lighting in a number of conference rooms.