Light bulbs are becoming a gold rush. A venture-backed startup has announced an under-$10 incandescent replacement light bulb based on induction technology. 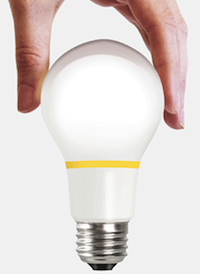 The Finally Light Bulb Company uncloaked today. It was featured in The New York Times yesterday and in many other news outlets today. Its 60W-replacement, 800-lumen bulb, as you can see, looks almost exactly like a traditional A19 incandescent. Various outlets say that the target price of the Finally Acandescent will be $7.99 when it becomes available this summer -- but when you go to the company's pre-order page, it says you'll pay $9.99.

Induction
Ron Lenk's induction primer offers some background on how the technology works. He concludes: "I should mention that I've seen an induction lamp configured to resemble an A19 (vaguely). It was this big honking thing that must have weighed a pound, and had a huge bulge in the middle where the coil was."

Finally does seem to have accomplished the downsizing of induction technology to fit comfortably into an A19 envelope -- not a trivial accomplishment. It hired senior scientists from Osram Sylvania and GE to get this done. The bulb's weight is not stated, but it looks like it might mass less than a typical LED-based bulb.

Spectrum
Finally's website talks in general terms about the warm, incandescent-like light the bulb produces, yet the spec page lists its CRI as only 83. I didn't see any representation of the bulb's spectrum on the Finally site or elsewhere. Most of the induction spectra I found online, such as this one, relate to plant-growing lights (and most of those are directed at cannabis production). If Finally's spectrum is anywhere near as spiky as some of these, it's understandable that its color rendering will not be exactly incandescent-like.

Mercury
The Finally bulb contains a small amount of mercury in solid form, according to the NYT coverage, which goes on to say that the amount is so tiny the bulb can be disposed of in landfills. However, the Lighting Facts label on the Finally site reads "Contains Mercury. For more on clean up and safe disposal see epa.gov/cfl."

To be fair, the Lighting Facts rules may require that disclaimer unless the amount of mercury is exactly zero. Nevertheless, the label won't be a comfort to the average environmentally conscious consumer.

Funding
Finally has taken in $19 million from venture capitalists, according to the NYT. The founder has no prior experience in the lighting or electronics industries (though some of the staffers obviously do). Our own Ed Rodriguez, no stranger to venture funding over a long career, had this perspective on the gold-rush mentality in evidence in the light-bulb business today:

[It is] interesting that there is so much investor money out there looking for the "next big thing." What a difference from a few decades ago when I was first raising some investor money. Investors asked a hundred tough questions, wanted to see some revenue, wanted to talk to potential customers etc. -- and almost never invested in individuals without a quantifiable significant achievement or corporate track record as manager or executive in the industry involved.