This week: GE gets onboard with location-aware shopping; also, solar roadways and solar-powered street lights. 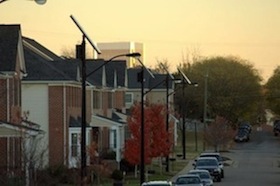 Solar street lights
The developer of the new Randolph West housing development in Richmond, Va., has installed solar street lights from Sol Inc., instead of lights tied to the electric grid.

Lowering energy costs over the next 20-25 years was only one factor in the calculation, and according to a company spokesman, it was not even necessarily the largest factor. The savings in installation time were large, too: The Sol lights took only a couple of hours each to install, reducing the impact on traffic, parking, and noise. The installation didn't require trenching for underground wires or using specialists to hook up to the power grid. 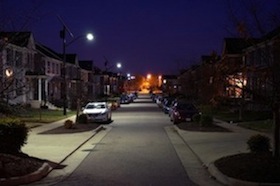 In all, the city of Richmond calculated the savings at $21,000 for each light pole over its lifetime, for a total of $420,000 in the development.

The press release contained no talk of lighting controls. But then, solar-powered lights don't need to be dimmed or turned off to save grid energy, because they don't use any.

I asked about the cost of ongoing maintenance for a solar street lights: Battery inspection and replacement? Cleaning of the solar cells? The spokesman replied:

The only notable [cost] item involved is replacing the battery every 5 years, which is $200 - $250... All other maintenance costs are factored into the upfront cost of the light... Most customers do not clean their solar panels because rain does most of the work. However, there is some degradation that occurs over a few years, that is factored into the long-term pricing of the light.

Philips SlimStyle BR30
We all knew that Philips (which sponsors this site) would find other uses for its SlimStyle packaging for LED light bulbs. Its unique heat sink, resulting in lighter weight and lower manufacturing costs, looks like a real advantage in the battle for market share in residential replacement bulbs.

The next instance is at hand: the SlimStyle BR30. The most surprising facet of the announcement may be the price: $12.97 when it is available for online ordering in July. CNET has a table comparing the new bulb to offerings from Cree, EcoSmart (i.e., Lighting Science), and TCP. The Philips offering is cheaper by $1.02 to $7.00 at this writing. CNET has also posted a photo gallery of the SlimStyle BR30.

There's another reason the BR30 configuration is a good fit for the SlimStyle form factor: The directional light means that the seam around the plastic case has no downside. For omnidirectional light from A19 bulbs, the seam does throw a bit of a shadow.

ByteLight & GE team for location-aware shopping
We met ByteLight in July. The Boston-area company is developing visible light communications for use in various applications in the commercial sphere, such as keeping track of the exact location of customers via their cellphones in order to send them timely offers or other retail guidance. (It's strictly opt-in.)

Philips has introduced its own connected retail lighting solution, and now GE is getting into the game by partnering with ByteLight.

The several mainstream writeups on the partnership (here's one from VentureBeat) mentioned Walmart as a likely adopter of the location technology, given that the retailer is working with GE to revamp lighting in its stores. But Walmart has not announced any such plans.

Solar roadways
Here is an early warning for a cresting hype wave coming your way. A couple in California has been developing the concept of hexagonal solar paving tiles that incorporate LED lights, heating elements, and other goodies. Power for free, plenty of manufacturing jobs, retiring dirty and polluting power stations, enhanced safety from indicators and directions built into roadways -- what's not to like?

As far as I can tell, the world's entire supply of solar roadway tiles exists on the couple's driveway, measuring perhaps 20 by 60 feet.

But the idea has caught the imagination of a lot of people. Artists have been busy envisioning roads, parking lots, paths, and airport runways paved with impervious solar panels that generate power. The Indiegogo campaign features a number of these visuals, as well as an over-the-top video -- "Solar FREAKIN' Roadways!"

The campaign requested $1 million to begin manufacturing. Eight days into its 30-day run, it has gathered more than $1.67 million.