Some Surprises From Lightfair 2014, Day 1

Here is a roundup of some interesting companies I spoke with at Lightfair, along with the awards announced at LFI.

LFI Innovation Awards
All the awards are linked from this (awkward, frames-based) page. For the most part, I had little luck turning up links to the products themselves on Lightfair's site or on the vendors' sites. Here are the winners of the show-wide awards:

In the category of Conventional, Retrofit and Replacement LED Lamps, the Philips SlimStyle LED lamp took the honors in a field with 30 entrants.

A surprise to me was the winner in the Controls, Building Integration, Site Automation and Distribution Systems category. Daintree was among the three finalists, but Schneider ELectric took the prize for its Energy Insight energy-monitoring solution. The company is here at Lightfair, and I will pay it a visit before leaving Las Vegas. 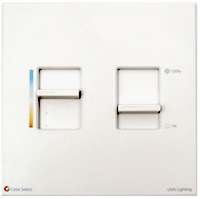 USAI Lighting
This company is the first to offer architectural lighting whose brightness and color temperature can be controlled independently. This contrasts with "warm dimming" scenarios, in which CCT and brightness change in lockstep.

USAI's "Color Select" lets users tune white light from 2,200K to 6,000K and independently control intensity from 100% down to 0.1%. A two-control wall dimmer, like the one shown here, can control the two dimensions, or programmable control systems can be used. The luminaires have efficacy of 58 lm/W, and the product line goes up to 5,000 lm. USAI guarantees fixture-to-fixture color consistency within a two-step MacAdam ellipse.

I asked Frank Cogliano, USAI's vice president of engineering, if he could elaborate on the LED technology behind Color Select. The company doesn't want to give away many details, other than to cite patent numbers 8,456,109 and 8,581,520. Both patents involve a white and a colored light source.

Luminus Devices
This Massachusetts-based company has been in business for a dozen years, funded by venture capital (upwards of $200 million by one estimate I heard), and occasionally pivoting to pursue one or another new opportunity in LED lighting. In recent years Luminus specialized in high-lumen-output LEDs for demanding applications such as projection and stage lighting.

Last June Luminus announced a merger with the Lightera division of Sanan Optoelectronics, the largest LED supplier in China (they sold $500 million in LEDs last year). Sanan was one of the first Chinese companies to scale up MOCVD (metal-organic chemical vapor deposition) operations successfully after the Chinese government announced incentives in the last decade to encourage LED manufacturers. The company is now doing business worldwide, with a broadened product line, under the Luminus Devices brand.

Last fall the company announced a line of COB LED products, to the surprise of some observers, and at Light + Building earlier this year unveiled a mid-power product line.

At Lightfair on Monday Luminus unveiled the XNOVA Sensus COB LED array, an outgrowth of Luminous and Lightera's work together. The Sensus arrays feature chromaticity coordinates below the black-body locus, and color consistency within a 2- or 3-step Macadam ellipse. They are targeted at applications where illumination is desired that is maximally pleasing to humans. Recent research has shown that people tend to prefer white light slightly below the BBL in retail settings.

I spoke with Luminus's CEO, Decai Sun, for a look at the company's future expectations. He indicated that the COB and mid-power lines, for use in general lighting, now represent about a third of Luminus's revenue; that fraction is expected to grow to a half by the end of this year and to two-thirds in 2015. The company will announce products for the automotive market early next year. Sun expects its UV product revenue to double by the end of 2014 and double again next year. He hinted at an emitter for UVC in the works (nobody has an affordable one yet).