When you need a thin light-emitting surface, what's the best alternative to expensive and less-than-efficient OLEDs? Edge-extracting light guides would certainly be in contention.

At Lightfair 2014, Bill Reisenauer and I met up at booth 1546, Global Lighting Technologies. Brett Shriver, GLT's vice president of sales, took us through the characteristics and inner workings of the company's flagship light guides for general illumination. (This is a small but growing part of GLT's business, which also includes LCD and graphics backlighting.) 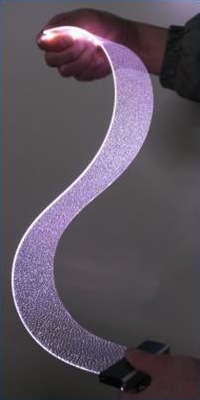 I didn't hear that this product line has an overall name or designation, but by the time I arrived, Brett was already into the details with Bill. The company's website doesn't indicate any particular product name, though.

Custom
GLT is set up to custom-design light guides to the specifications of its customers and then manufacture them in high volumes. A lighting company such as Hubbell or Juno (not necessarily actual GLT customers) might approach GLT with specs for a luminaire it wants to produce and sell.

Let's say the light-emitting surface wants to be 1 mm thick, lit with LEDs on two edges, to produce a given number of cd/mm2 at a given CCT and CRI. GLT may recommend particular lines of LEDs to investigate. Or the customer may come in with the LED supplier already identified. A further requirement for our hypothetical luminaire is that it has to send 60% of its light downward from one surface and 40% upward from the opposite one, in a particular designated spread and pattern -- and not necessarily the same pattern from the two surfaces.

Oh, and the light-emitting surface must be curved. Maybe even bendable.

I was surprised to learn that GLT can design a light guide that meets such demanding specs.

Manufacturing
It starts with figuring out the characteristics, proportion, and density of the nano-lenses that will be embedded into the light-guide medium. The parameters are adjusted to produce the desired spread and distribution of light, given the characteristics of the emitters. A production line is tooled up (normally, the customer owns the rights to the tooling). Production can be either by a roll-to-roll process -- suitable for higher volumes -- or by injection molding for lower volumes. There are some subtle differences in the physical characteristics of the light guide (in smoothness, for example), depending on which process is used.

If you look at the catalogues of lighting companies large and small for planar, OLED-like luminaires -- 1'x1', 1'x2', and 1'x4' are common sizes -- the chances are good that GLT designed and made their light guides.

GLT has about 1,600 employees worldwide. It is headquartered in Taiwan and listed on the stock exchange there. It has manufacturing facilities in the Shanghai and Hong Kong regions in China. Sales and engineering is based in the Cleveland area (home of GE Lighting, by no coincidence). The company in its current form is a result of technology spinoffs and corporate mergers stretching back decades. It has a million square feet of manufacturing space currently.

We met GLT briefly a year ago in a discussion of Rambus's patent practices. In 2009, Rambus acquired a portfolio of lighting-related patents from GLT for $26 million.