LED Lighting in a Campus Building

RPI's Lighting Research Center has evaluated the LED lighting in a new building at a small college. Some of the report's conclusions update conventional wisdom.

At Siena College north of Albany, N.Y., a new contemporary brick building was constructed. The three-story, 25,000-square-foot Rosetti Hall houses classrooms, meeting rooms, and offices. It was originally specified with fluorescent lighting, but a New York energy efficiency agency, NYSERDA, advanced funds to upgrade the entire building to LED-based lighting and to have the lighting evaluated by the LRC for its DELTA Portfolio series of analytical reports. (NYSERDA was the original instigator and funder for the LRC at Rensselaer Polytechnic Institute more than 25 years ago.) 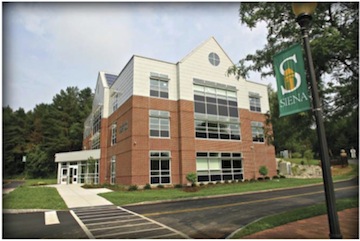 The lights were installed in July 2013. The LRC evaluation was carried out from September to November of that year, and its report was issued days ago. The luminaires are all 4,000K CCT, and most are shielded with opal diffusers, so in use they are essentially indistinguishable from fluorescents.

DELTA staffers, led by research director Jennifer Brons, evaluated Rosetti Hall by measuring the light at various surfaces in classrooms, offices, common areas, stairwells, utility spaces, etc. They then surveyed 200 students and faculty and staff members who use the building to get their views on the adequacy of the lighting and how it is used.

One takeaway from the analysis is the energy savings: 33% compared to fluorescent.

Uplighting vs. downlighting
Classrooms and lounge areas are lit with pendant strip fixtures that provide both up and downlighting, which are independently controlled. (These were made by Metalumen.) About a third of the instructors use the downlights only (putting about 60 footcandles on working surfaces). A sixth use uplights only (about 35 fc), and half of the total use both. Among faculty and students, about three-quarters rated the classroom lighting as "better" or "much better" than that in other classrooms on campus.

Task lighting
Offices are lit by double troffers (by Philips Day-Brite) and daylight from a window, which can be dimmed with a mesh shade. Task lighting is offered, as well, but few use it (just more than 20%). The reason seems to be that the overhead lighting is sufficiently bright (25 to 65 fc at the desktop) that supplemental lighting is rarely if ever needed. Clearly, the overhead lighting is not designed in the spirit of the new Washington State and Seattle energy codes, which strongly encourage the use of task lighting to conserve energy.

Controls
I was especially interested in the parts of the report delving into how real people use and react to controls that adjust the lights for daylight and occupancy. They seemed to notice and remember the glitches: the false-ons because a sensor wasn't pointed right, and the delay in coming on when someone enters a room. Dimmers in some of the offices took the overhead lighting down to only 40%, and people would have liked to see the light go dimmer. The report concludes that dimming behavior was not staged with different levels of load in the circuit; the parts of the building where a dimmer controls fewer lights had the problems.

Dimmers were installed on wall sconces (made by Beta-Calco), and the analysis suggested that these were unnecessary. The sconces are on 24/7 in hallways and common areas, but there the sconces contribute so little to the total light that dimming them doesn't have much visible effect.

DELTA -- the LRC's Demonstration and Evaluation of Lighting Technologies and Applications program -- has been operating for 20 years and has produced 44 case studies covering sites such as senior housing, schools, office buildings, and outdoor locations. The free reports are targeted to lighting specifiers, building managers, and architects.