This week: Business owners want more lighting quality standards, how to be seen on a bicycle, and PAR38 L Prize competition suspended.

DOE suspends PAR38 competition -- again
For the second time, the Department of Energy has suspended accepting applications for the PAR38 L Prize. The contest is intended to spur competition and stretch the boundaries of what is technically possible in solid-state lighting. 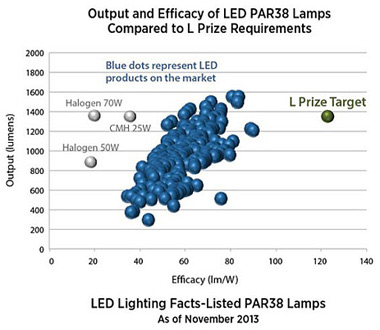 The program, formally named the Bright Tomorrow Lighting Prize, was first suspended in January 2011 after the L Prize for A-lamps was won be Philips; DOE said it wanted to apply lessons learned in that competition and possibly to adjust the requirements for PAR38s. The PAR38 L Prize contest was restarted in 2012 with a lower requirement for how many sample lamps had to be manufactured. In August last year, DOE relaxed the beam angle requirement.

Still, no company had indicated an intention to enter a PAR38 lamp for consideration. In April of this year DOE made a big publicity push, in which this community played a part, to spur interest in the competition. 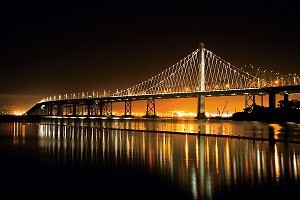 Still no entries, and none up to the day in June that DOE put the PAR38 L Prize on ice once more.

The major sticking point seems to be the Congressionally mandated requirement for an efficacy of 123 lm/W. The DOE is not at liberty to adjust this target.

The other end of the Bay Bridge
Philips Color Kinetics garnered a lot of publicity for the massive Bay Lights video sculpture that is playing out on the canvas of the western segment of the San Francisco-Oakland Bay Bridge. Perhaps seeking some of that glory, albeit in a more utilitarian vein, Cree and Musco Lighting are trumpeting their accomplishment in lighting that bridge's eastern span.

Business owners: lighting quality standards are insufficient
This Leapfrog Lighting poll is one of the first I have seen asking business leaders about lighting quality. The question asked of 201 business owners and managers was: "Do you believe there is sufficient standardization in the LED bulb industry (Energy Star, etc.)?"

Of those expressing an opinion, nearly two thirds believe that more lighting standards, in particular covering quality of light, are either needed or desirable. Over one third think the existing standards are good enough. 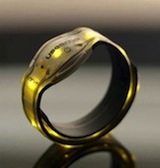 The poll sounds as if it has some validity to it. It was conducted by an outside research company, and was blind and randomized. The error rate is given as 3.92%.

Useeme bicycle turn signals
Here is another Indiegogo campaign for an LED-powered enhancer to turn signals on a bicycle. The similar concept that we covered earlier had problems of signal clash, we agreed in the comments -- its LED arrows could be confusing in the presence of the estab­lished hand signals for turning. The current effort is conceptually simpler, and its interface is as intuitive as gets: It doesn't have one. The Useeme senses hand movement via a built-in accelerometer and illuminates when the rider uses the conventional hand movements to indicate an intention to turn.