Home automation simplified
We met the GE Link bulb last month, and noted that it fits into a home automation scheme called Wink. The cheap, white-only adjustable bulb was of most interest for this audience, but now I would like to dive deeper into Wink -- which to the rest of the world is probably the bigger story.

Wink comes out of an incubator and "innovation platform" called Quirky, which recently announced a partnership with GE to bring some of its inventions to market.

Quirky's Wink aims to be the name you think of when home automation for dummies comes up in conversation. Its app and Hub can control over 60 devices: light bulbs, as we know, but also thermostats, door locks, window shades, water heaters, and other appliances. Home Depot is now selling many Wink-qualified gadgets. Some can be controlled with the (free) Wink app alone; others need to be in a network with the Wink Smart Hub.

Home Depot has established a singular pricing scheme for the Wink Hub. It costs $49, but if you buy one Wink-qualified device, that drops to $25. Buy two such devices along with the Hub and its price goes to 99¢.

It's not easy to get a comprehensive list of Wink-qualified devices on the Home Depot site. Whatever search I try, both Hue and Connected by TCP show up in the results list. I doubt that either has gone to the trouble and expense of validating interoperation with a competitor's controls. Yet here is Hue, sporting a "Wink App Ready" sticker; either Wink or Home Depot has taken advantage of Hue's open API.

Bulbs.com carrying Philips Hue
We have wondered before about the marketing plan behind Philips Hue. Is it a plaything just for gadget-happy techies? Is it a consumer device? An adornment in architect-designed homes? Or perhaps Hue will find a place in commercial and retail spaces? The latter possibility is suggested by the news that Hue is now available through Bulbs.com, a small-business-oriented retailer. And no, before you ask, Bulbs.com is selling the Hue A19 starter set for $199.95, the same as Amazon's price and a 2¢ discount from Home Depot's.

Light pollution alters reproduction cycle
French scientists have conducted a study on mouse lemurs, creatures whose reproductive cycle is quite sensitive to day length. In nature, the males of the species produce little testosterone, and in fact have no visible testes, until the day length reaches 12 hours in the summer; they then become sexually active. 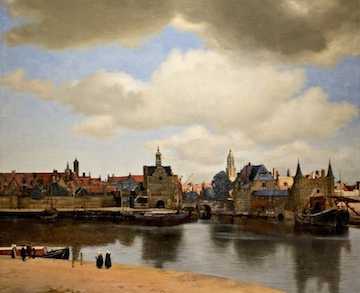 The researchers placed two groups of sexually inactive lemurs under artificial (fluorescent) lighting. One group had the lighting dimmed overnight to levels no brighter than moonlight. The second group was exposed to yellow LED light overnight, mimicking street lighting.

"After only two weeks," ScienceCodex reports, "the light-pollution group had considerably larger testes and higher levels of testosterone than the control group. The effects are thought to be caused by melatonin."

Another Dutch museum reopens with LED lighting
The Mauritshuis, a small museum in The Hague, just reopened after a two-year renovation and expansion during which a selection of its famous paintings, including Vermeer's masterpieces View of Delft (1661) and Girl with a Pearl Earring (1665), were sent around the world. The Guardian's art critic calls the Mauritshuis "the ideal museum" and "a home [away] from home for art." Of course the paintings are now lit by LEDs (as are those in its big brother the Rijksmuseum).

I wasn't able to find many details of the lighting installation in the coverage of the Mauritshuis's renovation. The New York Times says "the museum has LED lighting that is as soft as candlelight." The Guardian, linked above, notes the "LED systems calibrated to combine daylight with candleglow." I have been in touch with the museum via Twitter and email and will post anything I learn in the comments.