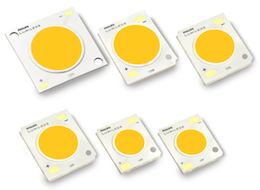 Lumileds (sponsor of this site) is positioning the Luxeon COB with CrispWhite Technology family as ideal for retail applications. At the link is a nifty interactive graphic comparing these LEDs with more traditional ones in illuminating a collection of colorful objects. Here are some of the characteristics of these COB LEDs:

The R9 value was not given in the materials I saw. But Lumileds claims that reds under these LEDs look redder, and less orange, than under traditional ceramic-discharge metal-halide lighting.

The illustration below shows an array of white goods under light from a standard LED (not identified) and under CrispWhite. The CrispWhite technology produces an extra blue peak at 410-415 nm that activates optical brightening agents to make the whites appear whiter.

Soraa's whites
Activating optical brightening agents is a trick that Soraa had all to itself until now. Its GaN-on-GaN LEDs pump a mix of phosphors with violet light, instead of blue. The company has been talking about the advantages of its approach since last fall (and we have been

Soraa claims many more advantages for its technology, including a smaller source size, higher beam purity, better heat dissipation, higher light extraction efficiency, and less droop at high currents. But the activation of optical brightening agents was a unique advantage, one that Soraa spent a good deal of effort promoting, including funding a Pennsylvania State University study that confirmed a consumer preference for the look of whites under Soraa's products. With CrispWhite technology, Lumileds has taken the force out of that particular Soraa selling point.

Et tu, Xicato?
At the same time, Lumileds is taking aim at one of Xicato's claims to distinction: the advantage for color rendering of LEDs positioned below the BBL. Xicato had sponsored a study demonstrating people's preference for the company's Vibrant series LEDs, with their large Gamut Area Index, as shown in the figure at the link above. I would love to see the GAI of the Luxeon COB with CrispWhite Technology plotted on that same graph.