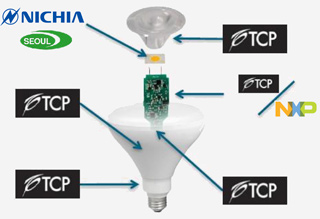 Moderately bullish analysts cover TCPI
We reported late last month that TCP International had gone public. Two analyst firms have now begun covering the company. Canaccord-Genuity rated TCPI a Buy and set a target price of $15 per share. The stock is now trading around $10.50. And Cowen rated TCPI Outperform and set a target of $18. The illustration, from Canaccord-Genuity's report, shows the degree of vertical integration TCPI enjoys in lamp manufacture.

DOE will modify LED bulb test procedures
The US Department of Energy's Office of Energy Efficiency and Renewable Energy has issued two notices of proposed rulemaking that modify some of the definitions for measuring lumen output, input power, and relative spectral distribution (to determine CCT). The meaning of LED lamp lifetime was also changed to "the length of operating time between first use and failure of 50 percent of the sample units." Here "failure" is defined as a lamp reaching a lumen level of 70 percent of its initial rating (L70). DOE is taking public comments on the proposed changes until August 4; see the full report for guidance on submitting comments.

Halco recalls LED bulbs
Halco Lighting Technologies is voluntarily recalling 14 models of PAR30 and PAR38 lamps used in recessed lighting, outdoor security, and retail displays. The firm has received five reports of the bulbs separating from their sockets due to overheating. Here is the company's recall page listing the affected products.

Building-scale interactive lighting
A Peruvian bank commissioned two lighting studios to come up with an interactive installation for the facade of their headquarters building. Claudia Paz Lighting Studio and Nicholas Cheung Studio worked with architect Felipe Ferrer on the artwork they are calling BCP Affinity, on the Banco de Crédito building in Lima, Peru. 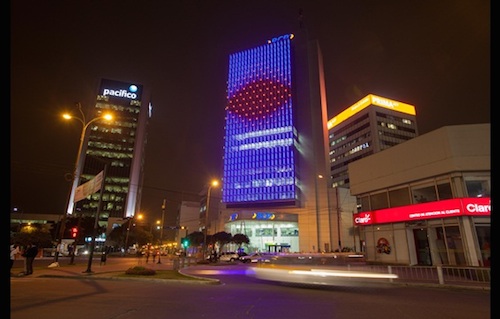 A touch-sensitive display is built into a monolithic podium in front of the bank building. It shows a scaled-down version of the building's LED display. When people on the street touch the podium, signals are generated that modify the facade in real time; the result is fed back to the podium display. The effect is mesmerizing, as shown in this video.

The building's facade features six layers of LEDs in two grids, one brighter and coarser, the other finer. The outermost layer uses daylight-visible Philips iColor ArchiPoint fixtures from Color Kinetics in a 19 x 28 grid. The lower layers of LEDs comprise strings of iColor Flex MX LEDs. In all the display is made up of 26,182 RGB addressable fixtures.