Philips Lighting has introduced a simpler and faster way to set the output current in production deployment without powering up its Xitanium LED drivers.

The full name of the product line is Philips Advance Xitanium LED Drivers with SimpleSet Technology. Philips makes a wide range of drivers for indoor and outdoor uses at various power levels, with and without dimming and control, etc. The SimmpleSet wireless programming technology has been introduced first to the 75W linear driver for use in troffer applications. 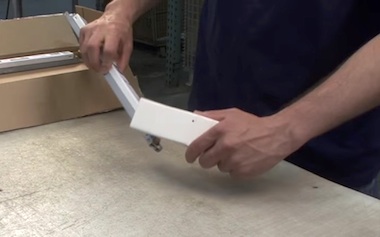 A video for the product (3:49 long) clearly shows how much more simply and quickly drivers can be programmed wirelessly than they can by the usual methods of adding a resistor, setting DIP switches or potentiometers, or powering up to program via software. By my rough estimate, once set up, the SimpleSet wireless programming takes about 2.5 seconds per driver to set the output current. The other methods look like they would require 10-30 seconds per driver. SimpleSet would clearly offer a big advantage for an outfit assembling hundreds or thousands of luminaires at a time.

How it's done
Programming is accomplished by waving a handheld programming device (designated the LCN9600) near one end of the powered-off driver. Audible and visible feedback confirms that the programming has been established. The process is simple enough for anyone in a manufacturing organization to do with little or no training, giving the luminaire maker flexibility about where in its manufacturing process the programming occurs.

The programming device is set up using Philips-supplied MultiOne software running on a PC or laptop. The LCN9600 is connected to the computer via a USB cable.

In theory, the drivers could be reprogrammed at any point, including after installation. This would require the lighting distributor, architect, or project manager to get on board with SimpleSet technology, as well as the manufacturer.

The first release of SimpleSet only accounts for adjusting output current from the driver, but other parameters will be addressed down the road. The Getting Started guide describes the interfaces in the MultiOne software where other settings will be accommodated.

I don't have a sense of how much cost SimpleSense technology will add to the driver. I assume that Philips has either filed for or been granted patents on the wireless driver programming process, so it might be a while before any other driver maker offers similar technology. Manufacturers will have to decide whether the speed and flexibility SimpleSet gives them is worth the cost differential.

(A division of Philips sponsors this site.)