The battle is joined after the first of the major LED suppliers, Lumileds, introduces a product that activates optical brightening agents.

Recall how Soraa has been talking up the ability of their violet-pumped GaN-on-GaN LEDs to activate OBAs in objects being illuminated. This ability was theirs alone until Lumileds (sponsor of this site) announced their CrispWhite technology earlier this month.

Now Soraa's CTO Mike Krames has responded to this development. In particular he counters and clarifies points made in an LEDs Magazine article on the Lumileds technology.

Krames points out that the second pumping peak in the spectrum that Lumileds and LEDs Magazine refer to as "deep blue" is in fact deep in the violet range of the spectrum; actually the peak is a bit to the left of Soraa's violet pump. Krames highlights three supposed defects in the spectrum of the CrispWhite LED in comparison with Soraa's: an overshoot in the blue, a gap in the cyan, and a deficit in the red.

These characteristics, or defects (depending on one's point of view), become manifest when regarded through the prism of NIST's Color Quality Scale (CQS). 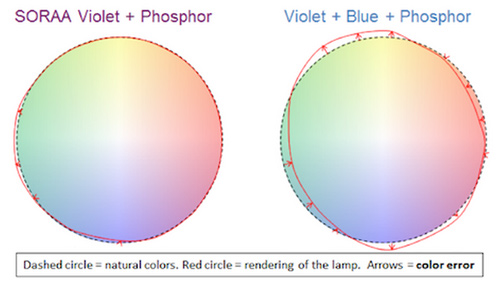 Battle of the metrics
In the same way that Xicato likes to point out the superiority of their products when compared using the Gamut Area Index (GAI) metric, Soraa puts forward the CQS performance of their LEDs vs. others'. Indeed, that comparison looks compelling, as shown in the illustration above contrasting Soraa's CQS results vs. that of a blue-plus-violet pumped LED of the sort that Lumileds used for CrispWhite. (It is not clear whether the right-hand figure is the result of measurements on the actual Lumileds CrispWhite, or is based on calculation.)

Natural or supernatural?
The CrispWhite technology produces light at a point below the blackbody spectrum (BBS). As we noted in our coverage earlier this month, Lumileds is following in the footsteps of Xicato, which had BBS LEDs in its Artist series light objects in a way that people tend to prefer. It makes colors "pop." Soraa, on the other hand, aims for a more complete fidelity to natural light. Which approach is better? As always, it depends on the application.

An artist working in her studio might prefer the Soraa lighting. A clothier lighting vibrant fabric and shoes might go for Xicato's.

Let's see if Osram, Cree, and Nichia put their oars in the waters of whiter-than-white LEDs.