The Copenhagen suburb of Albertslund has become an arena for live experiments with smart street lights and smart city controls.

This municipality, with a population of 30,000, is home to DOLL, the Danish Outdoor Lighting Lab. (Here is a translation of the project's About page.) At DOLL, which opened in the spring, researchers collaborate with companies, municipalities, and foreign cities to test smart lighting in actual use.

Like many nationally supported public-private partnerships, DOLL has goals that include creating green jobs in Denmark. The primary emphasis is on developing and testing smart lighting that provides maximal energy savings and carbon reduction, balanced with people-friendly qualities inspired by the human-centric lighting movement.

The municipality of Albertslund has a bit of a history with historically important street lamps. It seems that in the 1960s, designer Jens Møller-Jensen was working with his father, an archi­tect, on a park in Albertslund. Wanting to find a cheaper alternative to the proposed outdoor lights, Møller-Jensen spent a week putting together a prototype from an antenna, a jam jar, and a discarded traffic sign. The Albertslund lamp is now in use all over the world. 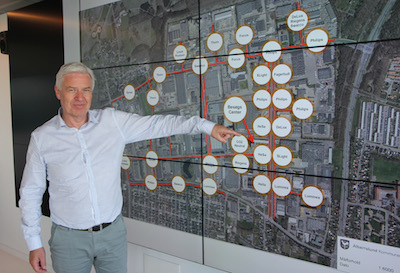 DOLL technology Manager Kim Brostrøm points out the visitor center's location on a map of the Living Lab (source: DOLL and Gate 21)

Three laboratories
DOLL consists of a Living Lighting Lab, a Lighting Qual­ity Lab, and a Virtual Lighting Lab. "Living" refer to the area of Hersted Industrial Park where interested parties can rent space to install smart lights for testing. "Quality" is a complete light testing lab, and "Virtual" is for creating 3D mockups of lighting systems in use.

In the larger original version of the illustration at left, you can read the names of com­panies that are renting space in the living laboratory. They in­clude: CO2 Neutral, Focus, Helia, HeSa, Louis Poulsen, Luminex, Osram, Philips, Riegens, SLight, Swarco, Thorn, and XLight.

DOLL is owned by a consortium consisting of DTU Photonics, Riso, Gate 21, and Albertslund Kommune. Gate 21, itself a public-private research cooperative, operates the Living Lab. Here is a set of slides on DOLL from last April, in imperfect English, that places the project and Albertslund in a wider European context of smart-city research and development.