Monday Roundup: Think the Lights On

This week: a virtual hub in the cloud, the Biei collection of oddly formed lamps, and thought control for the Internet of Things.

Thought-controlled lights
Philips and Accenture worked together on a proof-of-concept project that, if it ever makes the jump to product status, could have a big impact on the lives of people living with ALS (Lou Gehrig's Disease) or other neurodegenerative conditions. Of interest to this community is the ability to control lighting with your thoughts. But the larger picture is about a user interface for controlling many facets of one's environment without using one's body or speech. 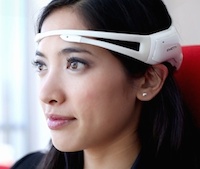 The project uses a lightweight headset from Emotiv (the Emotiv Insight Brainware, $299) that senses EEG brain­waves. The headset is shown here worn by Tan Le, founder of Emotiv. The headset sends wireless signals based on the wearer's brainwave patterns to a tablet computer, where an application interprets the signals into simple commands such as up, down, left, right, start, or stop. The commands control products such as Philips Lifeline Medical Alert Service, Philips SmartTV, and Philips Hue wireless lighting. (For those with other sorts of physical impairment than full-body paralysis, the interface can also accept commands by voice or eye movements.)

This video gives background on the project and shows a man immobilized by ALS using it to interact with the lights and to communicate with those around him.

Wind-powered lighting
Here's a fascinating testimony to the surprises Nature still has in store. South Korean researchers have found and characterized elastico-mechanoluminescent materials that emit bright light when bent by the flow of wind. Mechanoluminescence -- the emission of light under applied mechanical stress -- has been known for hundreds of years, since 1605 in fact when Francis Bacon reported seeing flashes of light when he snapped sugar crystals. But light emission when materials are merely bent, not fractured, wasn't discovered until almost 300 years later.

Here is the abstract of a paper in which the research group explored zinc sulphide microparticles embedded in a polydimethylsiloxane elastomer. They made the material emit light as strong as 100 cd/m2 (about the brightness of a computer monitor) in a wind equivalent to a Category 2 hurricane.

Clearly the technology has a ways to go before it becomes practical for luminaires, if you can call any light practical that goes dark when the wind stops.

The move offers a few obvious advantages. The hub software can be kept up-to-date far more easily, since it is central -- no need to download software or firmware and update individual customer boxes. Securing a cloud-hosted package is easier than having to worry about the state of the software running on numerous distributed boxes.

But there are drawbacks as well. A network needs its Internet connection to be operational full-time or the lighting controls won't work. And a cloud-based hub puts an installation at the mercy of the supplier's business plans. If you buy a hardware-software-based lighting control solution, it will keep working no matter what happens to the supplier that sold it to you. But if a critical piece of your infrastructure lives in the cloud, the whole thing could go down if the supplier changes its business direction and shuts off that service.

The Biei collection of oddly formed lamps
Artistic luminaries are nothing new, but Japanese lighting company Only 1 is selling lamps shaped into icicles, lava flows, and less recognizable forms. The line is called Biei.

The Molten Lava bulb, pictured here, weighs about half a pound (540 grams) and is designed to be placed flat side down on a horizontal surface. When illuminated it does look rather like lava flowing from a hose.