This week: discomfort glare in offices, GE's big bet on halogen bulbs, and COB LEDs from Sharp that dim to warm. 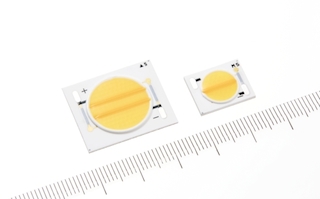 Sharp's dim-to-warm Zenigata COB LEDs
We have been talking for some time about LED sources whose light drops in CCT as it dims, and we noted at this year's Lightfair how the topic is warming up (as it were) in the marketplace.

Sharp has now introduced a chip-on-board LED that accomplishes the dim-to-warm trick using electronics right on the board. The driver need only vary the input current to achieve dimming and a warmer color temperature. Its term for this technology is Natural Toning.

This is the first dim-to-warm solution that I know of implemented at the COB level. Most others that offer the functionality do so at the system level in an engine, lamp, or luminaire. Light from several LEDs is mixed in varying proportions; often red and/or amber LEDs complement white ones in these solutions. 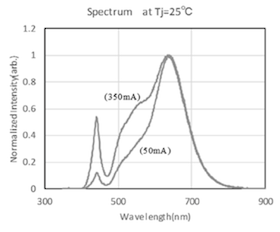 From the look of Sharp's COBs, one or two stripes of a different phosphor accomplishes the dim-to-warm trick aided by the control electronics.

The figure at left, above, shows the relative spectral intensities of a Mini Zenigata driven at 350 mA and at 50 mA.

Financial fragility in China's LED industry
LEDInside.com put together some numbers from 16 Chinese LED manufacturers, and found a worrisome financial picture. In 14 of these businesses, accounts receivable ballooned in the first half of 2014. For five of the companies, accounts receivable exceeded revenues in that period.

LEDInside.com puts the blame on intense competition for many companies' attempts to "tamper with prices and accounts receivable."

Despite apparent sales growth, inventory levels increased in 15 of the 16 manufacturers. And four of them have put aside bad debt reserves that nearly ate up reported profits.

The worry is that if one firm gets caught short of cash to run operations and pay creditors, it could cause a liquidity crisis and an avalanche of financial difficulties across supply chains. "A butterfly effect can be triggered when a series of companies are indebted to each other and none has the means to pay back the money it has borrowed," warns LEDInside.com.

The researchers constructed simulated open-plan office spaces on three continents and compared the acceptability of several varieties of non-uniform luminous surfaces to three nationalities of office workers as they went about simulated office tasks. The data were collected in Eindhoven, The Netherlands; Briarcliff, N.J.; and Shanghai.

The results indicate that the traditional method of assessing glare, the Unified Glare Rating, underestimates glare perception when the luminous surface is "spotty," and adding a rim of a different luminosity around the luminous surface improves acceptability ratings for the luminaires. These results held in all three nations.

GE's big bet on halogen bulbs
General Electric has invested $30 million in factories in Ohio and Illinois that will manufacture halogen light bulbs. Walmart will stock these bulbs nationwide beginning next month and will promote them as supplies of traditional incandescents dwindle.

While the halogens are 30% more efficient than vacuum incandescents, they can't hold a candle to LEDs or CFLs in terms of either efficiency or product lifetime. Still, halogens are cheap. GE said its consumer research indicates that the numbers one and two concerns of US consumers are price and country of origin (made in the US). "The key on this is we have both," a GE spokesman said.

GE expects halogens to capture a majority of the new bulb market in this country, which is about a billion bulbs each year.