Trends From the SSL Ecosystem Summit

The SSL Ecosystem Summit promised an overview of the state of the SSL world and guidance on important trends going forward. Here are a few of the highlights.

The keynoter at the summit was M. Makarand (Chips) Chipalkatti, managing director of Dr. Chips Consulting. Here are the nine key trends that Dr. Chips believes characterize the state of the industry today. We will examine some of these in more detail in future blog posts.

The death of CRI
This was brought out most starkly in the standards session. Terry McGowan, director of engineering for the ALA, reminded us of what we well know: that CRI is insufficient to capture color perception. (See All a Designer Needs to Know About CRI and Color Blues.) He brought the news that in August the Illuminating Engineering Society told governments to stop using CRI in defining energy regulations. McGowan believes that the combination of CQS and GAI might be the eventual replacement. N. Narandran, director of research at RPI's Lighting Research Center, told us that the LRC's ASSIST program has gotten behind the combination of CRI and GAI. Whatever the replacement for CRI turns out to be, its replacement is coming.

A few less obvious trends
Some of the more offbeat predictions and trends to watch came from David Schiller, president of Lighting Solutions Development. He suggested we'll see the cost-effectiveness of lighting controls drop as LED efficacy rises. Another development to watch for, a few years out: LED-for-LED retrofits are coming. Finally, Schiller suggested we keep an eye on the development of laser-pumped remote phosphors stimulated by laser diodes. LDs are being used in automotive and television applications, and he points out that this is the same route that LEDs took before arriving at mainstream illumination applications.

Value metrics
Mark Rea, director of RPI's Lighting Research Center, has been urging the industry to develop what he calls "value metrics" since at least December 2012, when his SPIE monograph of that title came out. The idea is simple: Benefit is the ratio of value to cost, and the SSL industry has been laser-focused on reducing cost. The result has been the race to the bottom with which we are familiar, in terms of color quality or any other factor. Rea says it's time to quantify the value part of the equation so that we will know when the numerator has increased.

Rea outlined the history of the development of Vλ and the lumen metric, around 1924, and CRI in the 1960s. He argues that the luminosity function really only applies to tasks such as reading, and that CRI or any single metric is bound to fail to capture the essence of human color perception -- that the problem is inherently two-dimensional (as the standards track discussion had pointed out). 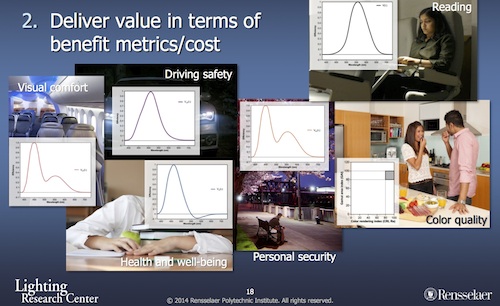 A concise summary of Mark Rea's thinking on value metrics.
(Click here for a larger version.)

What are the values that we want from light? Rea suggests four: driving safety, visual comfort, health and well-being, and personal security. The figure above summarizes all of the ideas present in his value metrics proposal, including the response curves that preliminary research suggests apply to these four values. They are the starting point for developing rigorous metrics for values about which the current metrics regime is silent.