The Business of SSL

Cree pre-announced disappointing quarterly results, its stock got hammered, and at least one analyst is asking whether vertical integration is a good idea after all.

First, here's what Cree said in advance of officially announcing and discussing its quarterly results on Oct. 21. The company lowered its revenue forecast to $428 million from the previously forecast range of $440 million to $465 million. It expects to report that revenue for LED products (components, chips, and SiC materials) fell 13% from the previous quarter and 20% from a year earlier. Revenue for lighting products (LED lighting systems and bulbs) should be up 51% from a year earlier, and power and RF products revenue should be up 24%.

Cree's stock dropped about 15%, which is a bit of a recurring theme around the company's announcements of quarterly results.

Was the quarterly miss a one-time thing, or was it indicative of something systemic? IHS speculated on some of the possible reasons for the shortfall. They include seasonality, an industrywide soft quarter, the price Cree pays for being early to market, competition from Asia, and Cree's emphasis on high-power chips when much of the momentum is swinging to mid-power (though a recent agreement to work with Lexstar seems aimed at remedying this imbalance).

Jed Dorsheimer, the sustainability analyst at Canaccord Genuity, issued a note reiterating the Buy recommendation on Cree but dropping the stock's target price from $64 to $41. (It is now trading at around $34.) He believes the shortfall is due mainly to tougher competition on Cree's home ground of high-power LEDs, but he notes provocatively: "This suggests vertical integration may be the wrong strategy and we will need to provide a deeper analysis here over the coming weeks."

Perhaps Dorsheimer's thinking has been influenced by Philips's moves away from vertical integration lately. (A division of Philips sponsors this site.)

So how does one make money?
The quest for long-term sustainability of profits in the SSL business put me in mind of a talk by Konrad Jarausch at the recent SSL Ecosystem conference in Cambridge, Mass., titled "Investments in Expansion-Stage Companies." The illustration below, excerpted from one of Jarausch's slides, shows the performance of three companies over the course of three adoption cycles of the LED business -- for cellphones, TVs, and lighting. 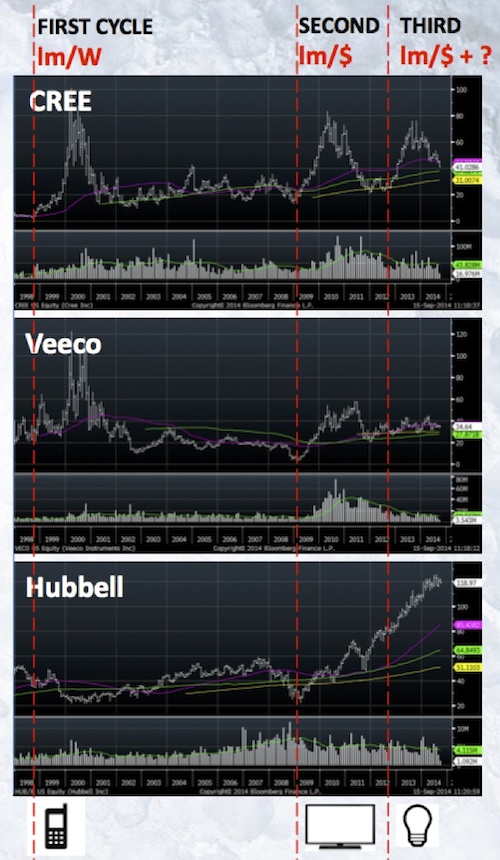 Cree has been vertically integrated. Veeco makes the machines that make LEDs from raw material. Hubbell bends metal and sells luminaires. Guess which one of these has been growing most consistently (judging by its stock performance) since the second cycle began?

Another metal bender, Acuity Brands, has also shown quite well over the last few years. Dorsheimer just issued a note raising the target price for its stock to $166. (The stock is now trading in the $130s)

It will be interesting to watch Cree in the coming quarters and years to see if there is any rethinking of its vertical integration strategy.