I sourced some LED filament bulbs made in China and had a few surprises, even though they were ordered from Amazon, not Alibaba. Still, the initial satisfaction level is high.

While researching the recent piece on LED filament bulbs, I took the occasion to buy a set of such bulbs from Amazon to populate a candelabra in my kitchen. It has been using flame-tip incandescent bulbs with an E12 base.

I ordered five "LED Filament Candle light 2W to Replace 25W Incandescent Bulb Soft White (2700K)" from the supplier "LED 2020." They cost $6.48 each. The maker is identified as "Shanren." The bulbs are not dimmable. They are available in the Fulfillment by Amazon program and thus eligible for quick delivery on my Amazon Prime subscription, and they arrived today.

The illustration at the left is how Amazon pictured the packaging; the one on the right shows what was delivered. There is an evident language difference. I would say offhand that what arrived is not quite what was ordered. Perhaps LED 2020 had a change of supplier. It happens.

The photo below right shows one of the old incandescents (on the left, darkened by evaporated tungsten) and one of the new LED filament bulbs. The incandescent says around its base: "Feit 40W 130V China." The LED is labeled: "LED candle light 110V-60Hz 1.8W 2700K E12." 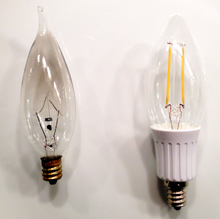 Amazon's listing says the LEDs consume 2W and replace incandescents of 25W, putting out 240 lm. The bulbs themselves say 1.8W. Their brightness is considerably greater than that of the incandescents, which I would estimate not above 150 lm -- see the comparison below left; that's the LED on the left. At 40W, those incandescents are about the most inefficient bulbs I have ever heard of. 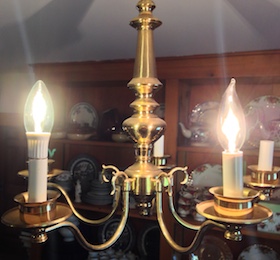 While the LEDs are marked 2700K, they look distinctly cooler than the incandescents. This is not a show-stopper. When my wife first came home and saw the new bulbs, her first and only reaction was: "They are too bright." We will be in the market for candelabra shades, and those are bound to warm up (as well as dim) the light.

It remains to be seen how long the LEDs will actually last. They are rated for 25,000 hours, but I'm keeping the packaging in case any unpleasant surprises necessitate a return to Amazon.

Those lights are on for about an hour a day in my kitchen. The incandescents burned around $9.50 a year in electricity, which hereabouts costs 13¢ per kWh. The new LEDs will consume about 40¢ per year for as long as they last. ROI will be under four years, even for these low-duty-cycle lights.

If one of the new bulbs fails early, I could send it to Ron Amok for a teardown. Come to think of it, I wish I had bought an extra just so we could see how they are made. What kind of driver is in that little base?