Street Lights After 5 Years in Service

There's nothing like real-world data to put all of our industry's promises of LED and luminaire longevity in perspective.

The US Department of Energy's GATEWAY program provides such real-world data on installed LED lighting projects. A new GATEWAY report (brief here) examines the performance of street lighting installed on a freeway bridge in Minneapolis, MN, five years after installation. 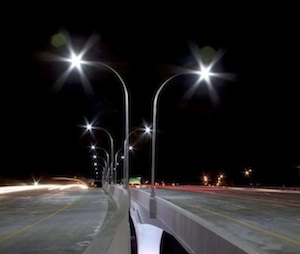 Two luminaires had been subjected to laboratory testing before being installed on the bridge in September 2008. Those same two luminaires were removed in the spring of 2014 and transported to a testing laboratory, where they were tested as-is, cleaned, then tested again.

The results: After about 20,300 hours of operation the luminaires had suffered 18% decrease in light output attributed to ordinary lumen depreciation mechanisms (phosphor degradation, etc.); an unexplained 4% reduction in input power; and a 15% reduction in luminaire efficacy.

In addition the luminaires dropped in CCT by about 800K, increased in Duv by 0.01 (moving farther above the blackbody curve, towards yellow-green), and dropped slightly in CRI and significantly in R9.

The effect of dirt accumulation over five years further reduced lumen output by 12%, and distorted the light distribution pattern.

These luminaires date from the dawn of the LED lighting age. They were manufactured by Ruud Lighting's BetaLED division using Cree LEDs (XR-E, generation Q5 chips) with drivers supplied by Advanced Transformer. They are only about 13% more efficient than the high-pressure sodium lights they replaced. They are among the longest-serving outdoor luminaires in use.

At the time of installation, the manufacturer expected a useful lifetime of 20 years before the lumen output had dropped to 70% of its initial value. The five-year data indicate that an L70 of eight and one third years might be more reasonable.

The luminaires used on the I-35W bridge had another issue, a design defect that the manufacturer had identified before earlier testing at the 6000-hour mark. An optical gel used between LED and optics tended to grow a bubble that decreased light output by about 5% and somewhat distorted the light distribution pattern. (Use of the gel had been discontinued by the time of the early testing.)

The dirt depreciation data is somewhat eye-opening as well. One of the strong selling points of SSL has been that it lowers maintenance costs by reducing or eliminating the need to relamp. But if periodic cleaning of outdoor luminaires is going to be necessary to avoid premature lumen depreciation and shift in light distribution, that cost advantage may need a closer look. (Of course, the dirt depreciation effect may well be present with legacy lighting sources as well; it's just that it's not usually measured.)

It is safe to assume that street lights installed in the present day would fare better after 20,000 hours. Or as the Gateway report puts it, "Readers of the report should recognize the limitations in applying long-term performance of early LED luminaires to their modern counterparts, due to continuous and ongoing advancements in the technology." That said, the Minnesota Department of Transportation has been and remains satisfied with their lights on the I-35W bridge.