This week: An LED light bulb for every household, fewer horse-and-buggy crashes, and Samsung getting out of the business of making lamps.

Samsung exits the lamp business
The South Korean electronics firm, which had been widely expected to challenge the first-rank contenders in the SSL business, has announced that, to focus on LED components, it will stop selling LED lamps everywhere but in its home market. Reuters reported that the company had identified the LED market as a new growth business back in 2010, when "Lee Kun-hee, patriarch of the owner Lee family, returned as the chairman of Samsung Electronics." The pullback may have something to do with Lee's continuing hospitalization since last spring. Price pressure from Chinese suppliers is surely a factor, as well.

CoB LED news
Philips Lumileds, Osram, Luminus Devices, and Seoul Semiconductor all announced new developments in packaged LED products. Lumileds, sponsor of this site, announced the 6.5mm LUXEON 1202s CoB, which the company claims can achieve 65,000 candelas at beam center in a 10° beam. It is available in CrispWhite technology (which we discussed last summer) with CRIs above 90 and with CCTs down to 2,200K.

Osram beefed up its Soleriq S 19 family of CoB LEDs with offerings having CRI above 90 in packages with 2,000, 3,000, and 5,000 lumens of flux. And Luminus announced that it has completed 6,000 hours of LM-80 testing on its Xnova CoB LED family, enabling luminaire makers using these LEDs to apply for Energy Star certification. Luminus now offers a five-year warranty on the products.

Finally, Seoul Semiconductor expanded its MJT (Multi Junction Technology) family of CoB LEDs with the Acriche MJT 3030, which outputs 103 lm at 40 mA and 155 lm at 60 mA. Its relatively high forward voltage lends itself to efficient driver designs, both DC and AC, according to LEDs Magazine. 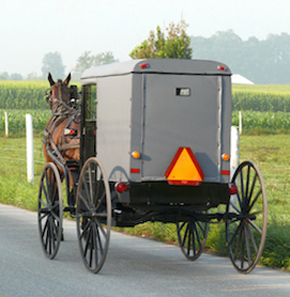 Puducherry delivers cheap LEDs to every household
The government of this Indian province began distributing LED bulbs seven months ago, and now it claims to have equipped every household in the region with LEDs -- 735,000 7W bulbs distributed to 245,000 households with a total population of 1.24 million. Over the course of the program, the cost of the bulbs dropped by half, to around $3.33 per bulb toward the end.

LEDs credited with reducing horse-and-buggy crashes
In Lancaster County, Pa., home of the largest concentration of Amish people anywhere, authorities are noticing that the rate of collisions involving horses and buggies has been declining in recent years. The improvement is attributed to the use of LEDs onboard the buggies. Apparently, it is not an uncommon occurrence for a buggy driver to be out after dark with a dead or nearly dead battery. "LEDs use so little juice, that you can turn off the headlights and run rear, four-way flashers on a dead battery for hours," said one such driver.