BMW is backing into the business of street lighting by way of a system for charging electric cars in urban environments.

There's plenty of money to be made as the world's stock of street lighting transitions to SSL. And there are plenty of hungry companies, many in niches far from lighting, that are proving themselves eager to grab a piece of the pie. 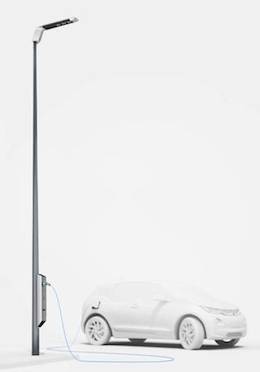 While you are changing out all of the street lights, why not add in sensors and controls? Why not make every light pole a cellular micro-tower, as Philips and Ericsson propose? Why not add an EV charging station to every pole?

That last one is BMW's idea, and the automaker showed two prototype "Light and Charge" poles last Friday at the Eurocities 2014 conference in Munich.

BMW already claims its ChargeNow network of recharging stations is the world's most extensive, but the addition of LED-based lighting was a new element. In conjunction with ChargeNow, BMW had developed a smartphone app by which drivers can access the "i ChargeNow network."

Two working Light and Charge stations are in place outside BMW's headquarters in Munich. Next spring the company promises a wider pilot program operated in conjunction with the city of Munich.

Paying for juice
Just how much does the electricity that powers an EV cost? The answer is going to vary widely by country and region, but I can provide a data point for New Eng­land in the US. I have been driving a Ford C-MAX Energi plug-in hybrid for 3 months now, and my best back-of-the-envelope calcu­la­tion says that the elec­tricity to charge its 7.6-kWh battery, good for 22 miles, runs about half as much as the gasoline that would take it an equal distance. In this time and place electricity costs 12¢ per kWh and gaso­line $3.30 per gallon (€0.699 per liter).

Partner?
We have to wonder where BMW is getting the SSL technology in the Light and Charge initiative. At its introduction a BMW executive was careful to say the company was introducing the technology "in cooperation with our partners," but none was named. Lux Review asked the company whether it is working with a partner in the lighting industry, but had no answer from BMW. Lux Review speculates that Osram would be a logical choice, given that that company is also headquartered in Munich.

Not the first
BMW wasn't the first company to float the idea of car charging stations on street light poles. The Romanian company Flashnet has been developing intelliLIGHT street lighting for some time now, and recently added charging stations to the mix of LED lighting and controls. The company has mounted a technology demonstration in the Romanian city of Brasov, where drivers can use their smartphones to log into an "authentication/authorization/accounting" system and pay electronically for the power used in charging their car.

BMW's entry into the lighting business, apparently for its own reasons of expediency, further serves to illustrate how valuable a piece of real estate the urban light pole actually is.