The Lifetimes of Luminaires

The DOE and the Next Generation Lighting Industry Alliance have issued a new edition of a report on LED luminaire reliability, including considerations that go beyond lumen maintenance.

The report, "LED Luminaire Lifetime: Recommendations for Testing and Reporting," extends the earlier editions in several important ways. First, it recommends accounting for color shift as a mode of failure, but only for those applications for which color stability is important. Second, it suggests that catastrophic failure be considered alongside lumen depreciation and, now, color stability in characterizing the expected lifetime of a luminaire. 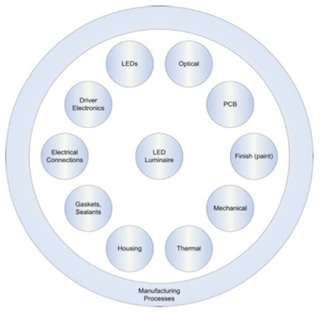 LEDs Magazine has a good description of what this means in practice. In addition to giving a B50/L70 lifetime, for example -- the number of hours by which 50% of a sample of luminaires would have dropped in output below 70% of their initial rating -- a luminaire maker is urged to add an F10 rating. This represents the time after which 10% of the sample would have failed catastrophically, usually by some cause other than the LEDs failing. The rated lifetime of the luminaire would then be quoted as the lesser of those two values. (The DOE's report does not suggest the 10% criterion for catastrophic failure; that is the level used in LEDs Magazine's example.)

DOE and NGLIA identify 11 constituents (see figure) that could potentially contribute to catastrophic failure of a luminaire: LEDs, optical, PCB, finish, mechanical, thermal, housing, gaskets/sealants, connections, driver, and manufacturing. The reliability of a luminaire is the product of the reliabilities of all of these elements.

The accelerated "hammer testing" that we wrote about early this year comes in for special mention. That test regime, devised by RTI International, served to reinforce the belief that non-LED luminaire components are more likely to fail than the LEDs. The report suggests that we might be able to synthesize out of such accelerated testing ways to extrapolate the lifetime of luminaire components under more normal conditions.

The report recommends defining three classes of luminaire reliability, cutting across all product and application categories: lamp-replacement grade, standard grade, and specification grade. This classification would act as a shorthand to communicate to the market the level of reliability and product lifetime to be expected, and would spare manufacturers from "requiring all products to undergo an extensive 'one size fits all' testing regimen."