This week: Blue LEDs to reduce suicides, laser diodes in the future of lighting, and Philips lighting spinoffs.

Not much has come out about how these moves will play out. Recently there has been news on both fronts. LEDInside.com reported on a talk by a Lumileds executive at a trade show in Taipei. Sean Zhou, Asia regional marketing director at Lumileds, said the Lumileds/automotive combination will trade under a new brand name beginning in 2015. He called the possibility that other market players such as Cree or China's San'an Opto could become shareholders in the new venture "highly unlikely," and he said Philips will remain a shareholder in the new venture. 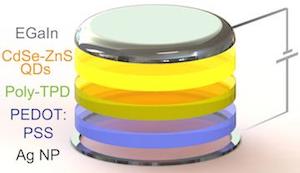 Separately, Reuters reported that several private-equity firms have presented "indicative offers" to Philips for a majority stake in its lighting business. Sources said that the list of interested buyout groups includes Bain Capital, CVC, CD&R, KKR & Co., and Onex. The offers value the business in the range of $3.1 billion to $3.7 billion (€2.5 billion to €3 billion).

3D-printed LEDs
It's not clear whether this report foretells a real technology direction or a parlor trick. Researchers at Princeton University have produced functioning quantum dot LEDs by printing them from five separate raw materials (see figure). First they built a custom 3D printer capable of handling the multiple sources, taking six months and $20,000 to do so. They proceeded to print QD LEDs in several configurations: standalone, embedded in a transparent cubical matrix, and bonded on to a curved surface. Here is the abstract in Nano Letters.

Blue LEDs to reduce suicides
The UK's Network Rail has installed blue LEDs on platforms throughout the train station at Gatwick Airport. The theory, borrowed from research on the Japanese subway system, is that blue light presents a benevolent atmosphere and calms people who may be standing on the platform ready to do themselves in.

The idea may be somewhat foreign to those in the US, where guns are so widespread and easily available that they are the leading method of suicide -- 127 times more common than "transportation-related" methods. But in other countries, such as the UK and Japan, the preferred exit strategy is jumping in front of a subway train or jumping off a bridge. We wrote last year about the use of LEDs in an anti-suicide program on a bridge span in Korea. The results of the Mapo Bridge project have fallen short of expectations.

Nakamura says laser diodes in lighting will be a thing
Lux Review asked Nobel laureate Shuji Nakamura what he hopes to achieve in the next half decade. Nakamura replied that laser diodes have a future in lighting. He cited the laser diodes in the headlamps of certain BMW and Audi models, noting that they are 10 times as efficient as LEDs in that role.