I ordered two round Philips SlimSurface downlights from a local supplier. Here's how it went. 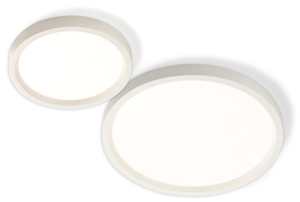 The fixtures are dimmable down to 10% with common triac dimmers (so they say; mine are not on dimmers so I can't confirm). They are rated for 50,000 hours of life to L70 and warranted for five years. The 5" models produce 630 lm and the 7", 980 lm, both at 61 lm/W. The LEDs are by Philips, according to the product literature -- it does not say Lumileds, but that would be a good assumption. (Philips Lumileds sponsors this site.)

Here at home
I had my eye on these fixtures as soon as they came out. I wanted to use a 7" downlight in a downstairs bathroom, which currently had two Cree bulbs in sockets inside a ceiling fixture (for which neither I nor my wife had any fondness). And a 5" SlimSurface seemed to be a good solution for the laundry room, whose fluorescent ring had recently died (probably the ballast).

I settled on the 7", 3000K, 80 CRI, 980-lm light for the bathroom, and the 5", 2700K, 90 CRI, 630-lm one for the laundry room, and set about looking for a distributor in my local neighborhood. Google was very little help: it turned up a Philips facility several towns away, which was a wholesale warehouse, and a lighting distributor 40 miles distant that does not even carry Philips lighting products.

Eventually I found a branch of Standard Electric Supply not too far away and called there. The manager located SlimSurface luminaires in his catalog and promised to order what I wanted and mail them to me without additional charge. The total bill with tax was $103.91.

Installation
I don't like to mess with 120 VAC, so I hired a local handyman to install the lights. It went almost as smoothly as the product literature had promised -- he was done inside of an hour. He did say that the drivers were a tight fit into the J-boxes, and he had to move all wiring out of the way first; he would have appreciated just a bit more miniaturization of the driver assembly.

In use, the lights do the job satisfactorily. They are downlights replacing omnidirectional fixtures, so there is a noticeable difference in light coverage, but overall I am pleased with the SlimSurfaces.

The light-emitting surface is textured, so the light isn't quite the smooth expanse that is shown in all the marketing photos. It has a distinct grain to it. It's even enough, but the luminaire doesn't present the appearance of an OLED, as the literature would lead me to expect. 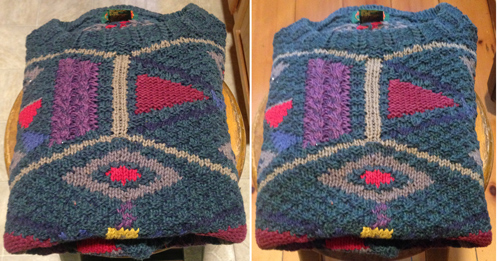 I can't see much of a difference that the higher CRI in the laundry room makes. The photo shows a sweater with plenty of saturated blues, purples, and reds illuminated by both downlights. (The ceilings are of equal height.) It's hard to make distinctions in the small photo that fits in this blog post; click to open a larger version in a new window. You may see, as I do, that the colors seem to pop more under the 80-CRI, 3000K light. Part of the reason may be because it is brighter than the one in the laundry room; the higher CCT may be in play as well.

One odd thing
I have noticed one effect I would like your help in unraveling. When first turned on while cold, both fixtures take a perceptible time to reach full brightness; I would estimate it as 0.1 or 0.2 seconds. Once they have been running a while, when turned off and back on they light up instantly. Also, both luminaires take a long while to fade to black when turned off -- the best I can estimate with a smartphone stopwatch app is about 0.8 seconds. This does not vary depending on whether the lights are cold or have been on.

I surmise that the startup delay happens because the driver needs a while to come to equilibrium when the components are cold. The turn-off fade: I don't know. An electrolytic capacitor draining? What do you think is going on here?