This week: more on runaway Chinese LED executives, a plea to turn off the indicators, and New York's New Year LEDs. 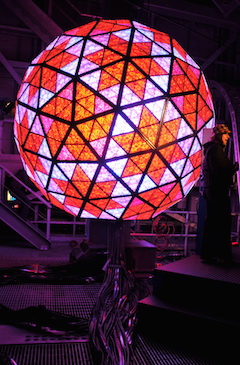 Times Square, Madison Square, and Flatiron
This year, again, the iconic Times Square ball, whose drop signals the new year, is festooned with LEDs. This time they are Philips Lumileds Luxeon Rebel LEDs, and there are 32,256 of them on a 12-foot (3.7 m) ball of Waterford crystal weighing 11,875 pounds (5,386 kg). (Philips Lumileds sponsors this site.) The photo shows 2010's edition of the ball.

Philips scored another New York publicity coup, lighting the outside of the refurbished Madison Square Garden with Color Kinetics LED fixtures. The press accounts all tout the ability to display the home team's colors, but I wouldn't think they would need CK's versatility to do that simple job.

Finally, the city sponsored a design competition for public art to adorn Flatiron Plaza, and the winner is on display there through January 4. It is a sculpture called Light Iron, and takes the form of a steel framework 25x17x9 feet in size, lit at night in an interactive display orchestrated by a Crestron 3-Series Control System.

A plea to turn off the (indicator) lights
Speaking of the energy-saving rebound effect, year's end brings a heartfelt plea from a commentator in Canada's National Post: enough with the profusion of indicator lights that is making our homes look like the bridge of the Starship Enterprise. Granted, we're talking about indicator lights here, not general-purpose lighting, but in my house they are getting numerous enough to read by after the main lights go out (well, nearly so). National Post comment editor Jesse Klein writes:

I cannot for the life of me come up with a reason for why anyone would want a light to come on, to inform them that a device has been turned off... The amount of light pollution coming from everyday electronics has become too much. Just because they can put lights in everything, doesn't mean they should.