Visible-light LED inventor Nick Holonyak, Jr., two of his graduate students, and two others have been awarded the 2015 Charles Stark Draper Prize, the "engineering Nobel."

The 2014 Nobel Prize in physics was awarded last October to three who represented the culmination of decades of research into LEDs, finally producing the blue LED. The Swedish committee passed over the workers who had accomplished some of the crucial earlier steps. 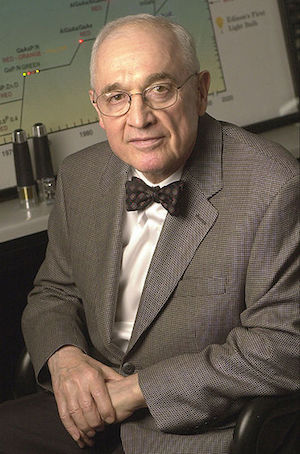 The National Academy of Engineering has awarded the Charles Stark Draper Prize in Engineering annually since 1989. It can be argued that the selection committee took a wider historical view of the sweep of LED development, honoring five people "For the invention, development, and commercialization of materials and processes for light-emitting diodes (LEDs)." The five winners, who will split the $500,000 prize, included one from the beginning of the process (Holonyak), two from the middle, and two from the end.

The latter pair are the selfsame Shuji Nakamura and Isamu Akasaki who shared the 2014 Nobel in physics. The third Nobel laureate, the younger Hiroshi Amano, was passed over for the Draper Prize.

The two Draper honorees from the "middle period" of LED development were both graduate students and protegés of Holonyak. They are George Craford and Russell Dupuis. Craford is credited with inventing yellow and amber LEDs; Dupuis developed the metal-organic chemical vapor deposition (MOCVD) process that now underlies the production of many varieties of semiconductors.

Overlooked?
When the Nobel winners were announced last fall, some felt that Nick Holonyak had been snubbed. He was quoted harboring similar sentiments at the time, but most of his chagrin was reserved for the lack of recognition for his mentees and friends Craford and Dupuis.

We ran a flash poll in October asking for readers' views on whether the Nobel committee had picked the right people to honor for the development of the LED. Holonyak got a few votes in that self-selected and unscientific survey, but wasn't an overwhelming choice of this community.

Holonyak currently holds the John Bardeen Chair in Electrical and Computer Engineering and Physics at the University of Illinois at Urbana-Champaign. He was the first graduate student taken on by John Bardeen, a double Nobel laureate for the invention of the transistor and for the theory of superconductivity. Bardeen and Holonyak worked closely together until the former's death in 1991.