Farewell to All LED Lighting

After a 24-month run in the thick of the SSL revolution, All LED Lighting will cease publication today.

It was the best of times. (No, it really was not also the worst.) We launched in February 2013, when the SSL wave was just beginning to gather strength and rise into wider visibility outside the lighting industry. (Readers and members of this community could foresee the ascendence of LEDs in general lighting by the early 2000s; some of the farsighted perhaps envisioned this revolution upon first hearing about the achievement of the blue LED in the early 1990s.)

When we began publi­ca­tion, few outside the lighting industry even knew what an LED was. Fewer knew what lumens were, and fewer still had heard of CRI, let alone CCT.

In May of 2013, David Pogue could write a feature piece in the New York Times intro­ducing the new lighting technology to a wider public -- without once mentioning CRI. In the com­ments and conver­sation that followed that article's publica­tion, it emerged that Pogue had been unaware of that essen­tial metric.

We published 879 items over 24 months: 792 blog posts, 70 flash polls, and 17 cartoons. We really did cover the breadth and depth that this commun­ity's name im­plies: see the cumula­tive Table of Contents for the site.

The table at right breaks down the contributions of those who have produced the content we have dissected, discussed, and debated for two years.

I want to thank Founding Editor Lee Goldberg for laying a strong base on which I was privileged to build; our sponsor, Philips Lumileds, for steadfast support; UBM for providing the space and resources that enabled it all to come together; All LED Lighting's dedicated bloggers and moderators; and you, this community's members and readers, without whom all of us would not have bothered. 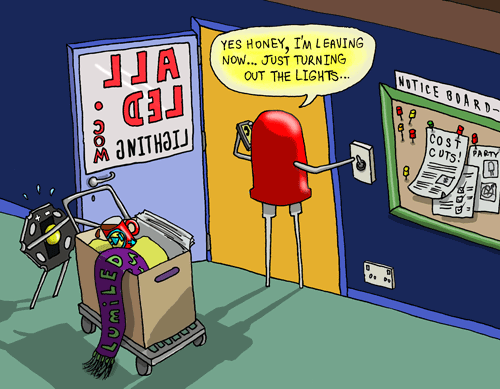