The energy-saving program was approved last month by UNC's board of governors. It is intended to save $25 million in energy costs over seven years as part of a mandate from the state to achieve 30 percent savings in energy, relative to 2002 through 2003 levels, by 2015. 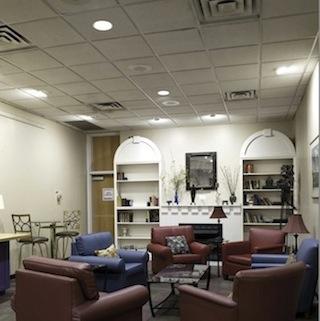 Some of the new Cree LED lights installed at Appalachian State University of the University of North Carolina. These are LR6 downlights with a CRI of 90+. (Photo: Cree)

Cree will be supplying a variety of LED products under the program, and expects its CR24 troffer with TrueWhite technology to be installed widely, according to LEDs Magazine. The CR24 offers a color rendering index of 90 and efficacies ranging from 90 to 130 lumens per Watt.

In deciding how to meet its energy efficiency goals, UNC brought in Johnson Controls to perform an energy audit. The audit identified lighting and its control as two productive areas in which to pursue energy savings. The university system then hired Johnson to manage the overall project, in addition to supplying controls for lighting and building management.

Over the next couple of years, the initiative will apply LED lighting to needs on the campuses including residence halls, classrooms, research labs, and outdoor lighting including parking facilities.

All in all, this project is on a similar scale to the city of Los Angeles upgrading its street lights to LEDs -- 141,000 in the phase just completed.

Home town advantage
Cree is a North Carolina company, and in fact, its origin in 1987 traces back to research performed at UNC. It stands to reason that the company had an inside track in a process as political as awarding a large contract for the state university system. North Carolina reaps double benefits if the supplier who is helping them to save money on energy also, in the process, adds jobs within the state -- and it's an extra bonus that they are "clean energy" jobs.

UNC is known worldwide for its research prowess. It will be interesting to see whether researchers there try to measure the effects of improved lighting on academic performance.