LED lighting has won the hearts and minds of most museum lighting designers, but growing pains for this new technology are not completely behind us.

We have written at length about some of the successful installations of LEDs in the world's premier museums: Philips lighting Rembrandt and Vermeer in the Rijksmuseum; Toshiba lighting the Mona Lisa in the Louvre; and LumenPulse lighting the swimmers at the New England Aquarium.

Steve Rosen, lighting designer for the Aquarium project, summed it up this way at the LEDs Conference in Boston last month: "It's rare that I'm using a halogen in a museum."

The latest museum
This week brings news of yet another high-profile museum project: Osram is supplying the lights to illuminate Michelangelo's frescoes in the Sistine Chapel at the Vatican in Rome. The hidden fixtures will project light in the same direction as the sunlight coming in during the day, and the light will be directed more exactly than was possible with the legacy lighting. The new lights will raise the illuminance level at the frescoes 10-fold, from 5-10 lux up to 50-100 lux, a level more typical of a museum display than of a chapel. The caretakers have heretofore insisted on low light levels to protect the frescoes, but are allowing stronger illumination from the UV-free LEDs. Even at the higher light levels, the LEDs will save 60 percent on the energy bill, through a combination of higher efficacy and tighter beam control. 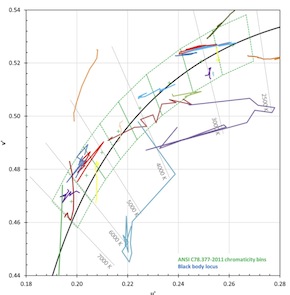 Shifting
Last week, blogger Bill Reisenhauer wrote about LED color stability and chromaticity shift, with reference to the Department of Energy's report "Color Maintenance of LEDs in Laboratory and Field Applications." Bill mentioned in passing that the report was drawn in part from a Gateway museum lighting project at the Smithsonian American Art Museum in Washington DC.

Now Margery Conner at DesigningWithLEDs.com has shone a spotlight on the color shift issues the Smithsonian has experienced since their conversion project began. The American Art Museum has 10,000 hours of experience with various suppliers' LEDs. Museum lighting designer Scott Rosenfeld was interviewed for the Gateway project (video here), and had this to say about the color shifts that have rendered some of the LEDs unsuitable for illuminating displays:

Within one gallery [we'll] have three manufacturers or types of LEDs. Each type is changing at the same rate; at the very least three or four steps of change after 4, 5, 6,000 hours; as many as seventeen steps of change at 10,000 hours.

Later in the interview, Rosenfeld gives the critical clue as to what may be behind this shifting: Their LEDs are not keeping cool enough in their luminaires. So perhaps careful attention to thermal design can spare other museums from experiencing this level of color shift.