Three bridges in Little Rock
Philips Color Kinetics supplied the lights for three bridges across the Arkansas River. The energy company Entergy started the ball rolling on the project to mark the organization's 100th anniversary. The unveiling ceremony happened Thursday, with former US President Bill Clinton in attendance, but I haven't found any good footage from that affair. Below is video from the first test of the lights, two months ago (here it is on Vimeo).

A bigger Empire State light show
Speaking of Color Kinetics, we last visited the CK-lit Empire State Building just after Halloween, when the building's owner worked with the lighting design artist Marc Brickman and a local radio station to put on a light show synchronized with music. The iconic building will be lit with four separate light-and-music shows (created by Brickman) on four consecutive evenings leading up to Christmas Eve. The organizers will then monitor social media to evaluate the sentiment for the most popular of the four. That show will be repeated on Christmas Eve.

Clearly, the Empire State Realty Trust is getting better at organizing these choreographies of its 3,900 Philips Color Kinetics fixtures. Eight months went by between the first and second shows, and then the trust pulled off the Halloween extravaganza four months later. Now, in less than two months, it's mounting four new events. 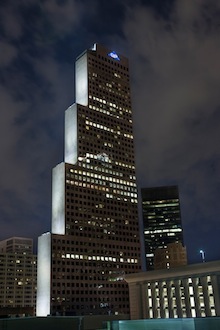 Relighting an Atlanta icon
The facade of the 52-story Georgia Pacific Center had been dark for seven years, because its owner was tired of paying $1,500 a month to light it at night. After an LED retrofit, the tower is once again a marker for the Atlanta skyline, lit by 60 Alpha spot and flood lights from Beacon Products, a subsidiary of Hubbell. Beacon's press release doesn't specify the color temperature of the lighting used, but the product catalogue offers 3,000K, 4,000K, and 5,000K options with CRI from 67 to 80 and efficacy from 91 to 104 lm/W. The LEDs lower the energy bill by 75%.

CSP is defined as a fully functional package that is the same size as or slightly (less than 20%) larger than the active area of the LED. CSP is not new in the semiconductor industry, but Lumileds got there first in the world of LEDs. Others are said to be working on CSP, as well. 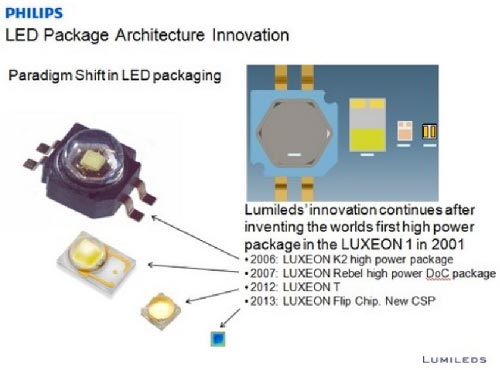