Best US Markets for Energy-Efficient Bulbs

Home Depot has mashed up US census data with sales records for light bulb purchases nationwide, to find the strongest markets per-capita for LED and CFL bulbs.

The company claims to be the world's largest seller of light bulbs of all types. Unfortunately from the point of view of this forum, HD's data scientists did not break out LED and CFL sales separately. They looked at sales for October 2012 to October 2013 in cities over 100,000 population in the US (taken from 2010 census data). They then spotlighted the 10 highest per-capita regions, and the next 40 after that.

Again unfortunately, that is the granularity of the data that HD released; the company did not provide an ordered list of the region most inclined to buy energy-efficient light bulbs, at least that I have been able to find.

The map below shows the top 10 markets (orange) and the next 40 (green). Here is a much larger version of the map. 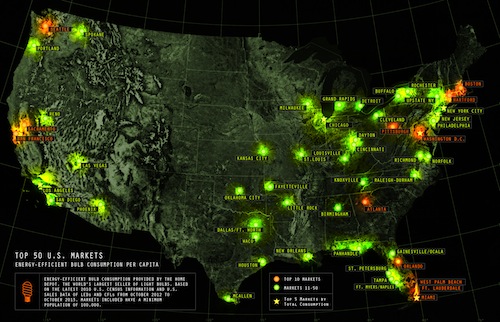 Rebates
Cities missing from the list that we might expect to be present include New York, Los Angeles, and Chicago (New York isn't even in the top 50). Some of the cities that made the top-50 list are also somewhat puzzling: Louisville, Ken.; Waco, Texas; Reno, Nev.? The availability of energy-company rebates may explain the oddities. Twenty-seven of the top 50 markets have rebates available for buying CFLs, LEDs, or both. Eight of the top 10 have rebates.

The map also shows the five largest markets by volume, not per capita. These are (again in alpha order): Chicago, Los Angeles, Miami, New Jersey, and Washington, D.C.

Politically speaking
Energy rebates have a political dimension. They represent governments attempting to steer a market, and not everyone thinks that is a good idea. The frequent emphasis in energy-company promotions on reducing greenhouse gases can also act as a political wedge, splitting off those on the right of the spectrum who don't acknowledge the existence of human-caused global warming. In general a sensitivity to energy conservation is more closely associated with the progressive end of the spectrum (but not exclusively so).

Might the regions and states where rebates are offered be influenced by the country's red-blue divide?

I find it interesting to compare the map above with one giving an indication of regional political sentiment -- such as this one, which shows the county-by-county breakdown of the 2012 presidential vote, but coded from red to blue (with intermediate shades of purple) by the closeness of the vote in each county. Click here for a larger version. (This map comes out of the work of Mark Newman, a physics professor at the University of Michigan with an interest in cartography.) 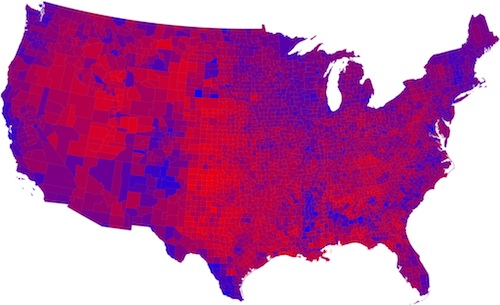 The large void in the middle of the country on Home Depot's per-capita map does seem to correspond to some of the redder areas of the country, and most of the top 10 are blue cities.

A better look at the political question would be provided by comparing the above with a map of energy-company rebates. I haven't been able to find such a thing. Let us know in the comments if you locate one.