That 3-atom-thick LED we wrote about? It's just the beginning.

Last month we shared a piece with EE Times about researchers who created the world's thinnest LED, only 3 atoms thick. They used the new material tungsten diselenide, WSe2, and produced it using the same scotch-tape technique that had yielded the first usable samples of graphene. 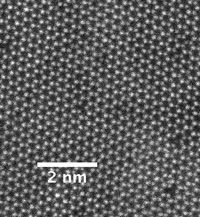 Scotch tape hardly qualifies as a production method. What is needed is a way to produce monolayers of this and similar materials that are capable of scaling to industrial levels.

A recent press release out of Rice University and Nanyang Technological University claims that researchers have developed just such a process using chemical vapor deposition (CVD) for the related semiconductor molybdenum diselenide, MoSe2.

Tungsten diselenide and molybdenum diselenide are representatives of a class of materials called dichalcogenides. These consist of one of 15 transition metals combined with one of the three chalcogens: sulfur, selenium, or tellurium. Forty-five compounds to explore, any one of which may yield applications in LEDs, on-chip lasers, or nano-scale light modulators.

It turns out that a few months earlier, a team from Stanford, SLAC National Accelerator Laboratory, and UC Berkeley had investigated a different avenue to scalable production of monolayer MoSe2, namely molecular beam epitaxy (MBE).

The researchers probed the monolayer material with X-rays from the Stanford Linear Accelerator and found that, among other qualities, MoSe2 has separate pathways on which spin-up and spin-down electrons travel. Thus the material is promising for the nascent field of spintronics -- which is like electronics but with information carried in electrons' spin states. An even more speculative and recent idea, dubbed valleytronics, uses both spin and charge to carry information; like spintronics, it is being eagerly explored.

And last June, researchers from the same lab at Rice University published work with Oak Ridge National Laboratory in which they used CVD to grow atom-thick layers of yet another family member, molybdenum disulfide, MoS2.

Research on dichalcogenides is obviously in its earliest stages, but it seems to me likely that among the 45 compounds in this family we will find some that open up novel applications for LEDs.