Cree has introduced a new style of LED light bulb, which looks and weighs more like a traditional incandescent, and retails for 20% less than the previous generation.

Other differences in the "4Flow Filament Design" bulbs from the Cree bulbs that first broke the $10 price barrier: the 4Flow bulbs have no heat sink, they weigh half as much, they eschew the "filament tower" design in favor of simpler PCBs, they are brighter but less efficient, their envelope is "shatterproof" plastic instead of coated glass, and their warranty is 3 years instead of 10. 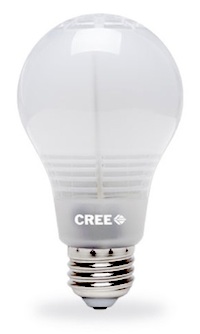 In short, this design is more like a consumer product and less like a precision electronic instrument.

The bulbs are available online now at HomeDepot.com and early next month at Home Depot stores. They come in 40W and 60W replacement sizes, at the same retail price: $7.97. They are rated for the same 25,000-hour lifetime as their predecessor bulbs. The 40W bulb consumes the same 6W as the earlier bulb, but the 60W replacement uses 11W vs. the previous 9.5W. The new design produces more light, being rated at 815 lm vs. the previous 800 lm. CNET's review reported measuring an even greater difference, 835 lm for the 4Flow vs. 746 lm for the previous model. But the 4Flow's overall efficacy is 74 lm/W, according to CNET, vs. 84 lm/W previously.

CNET's testing showed that the 4Flow bulbs behave better with dimmers than their predecessors did. CNET reports that a 4Flow bulb dimmed smoothly and without flicker or buzz to 5.6% of its full brightness, including with legacy dimmers.

The new bulbs use 8 high-power LEDs vs. 10 in the previous design, according to Cree's strategy VP Mike Watson, quoted in IEEE Spectrum. It looks like the bulbs won't have the dark spot at the top of the light distribution pattern that the earlier "filament tower" bulbs did.

The big innovation in this bulb is its method of handling the heat generated at the LEDs' junctions. Air slots at the base of the bulb let it draw in cool ambient air, which exits out slots at the top of the bulb. Cree's Watson claims that this cooling design works equally well whether the bulb is mounted upright, sideways, or upside down, according to IEEE Spectrum. Personally I am going to maintain skepticism on that claim until measured data are available. My guess is that the flow of heat and air will prove greatest when the bulb is upright.

I have to assume that Cree has filed for patent protection on the 4Flow cooling system (among other design aspects in all likelihood). (Mother Nature News refers to the lamp's "patented cross-flow convection technology.") I have not seen word of any issued patents in this area, nor can I find one in a quick search of patents.google.com. It will be interesting to see what transpires if others imitate the cooling system design, and then patents are issued.