This post was written by Keith Dawson for UBM Tech’s community Web site All LED Lighting, sponsored by Philips. It is archived here for informational purposes only because the All LED Lighting site may go dark at any time. This material is Copyright 2013 by UBM Tech.

Meet the company that will light up the spire atop the western hemisphere's tallest building.

Later this year, LEDs from Barbizon Lighting Co. will illuminate the spire of the new One World Trade Center building in New York City. 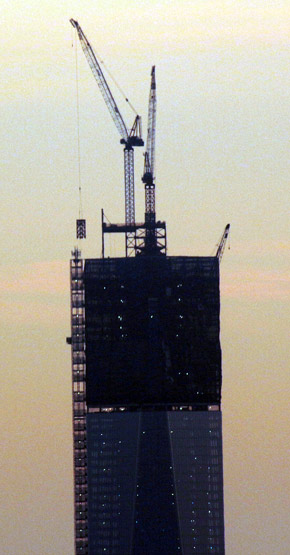 The building known as 1-WTC, formerly called the Freedom Tower, is the fulfillment of a promise that New York's mayor Rudolph Guiliani made on the day of the 9/11 terrorist attacks: "We will rebuild." When the last piece of its spire is erected, as soon as the end of this month, 1-WTC will top out at 1,776 feet in height -- heavy symbolism involving the year of America's founding fully intended. Including the partially constructed spire, it is already the tallest building in the western hemisphere.

Some time later this year, the spire will be illuminated by RGB LED lights, and from its top a rotating, 300,000-lumen, white LED-powered beacon will shine.

The outfit overseeing this showcase LED project is Barbizon Lighting Company in New York. They are in the business of designing LED lighting systems for theatrical, film and television, architectural, and other uses. I spoke with John Gebbie, business development manager for Barbizon Electric Co., about the company's involvement with the 1-WTC project.

You can get an good idea of the completed building from this rendering on the site of the project's developer, The Durst Organization.

Over 6 years ago, after 1-WTC construction had begun, the spire lighting package was designed by lighting consultant Claude Engle along with the fixture manufacturer Strong Entertainment, using Strong's xenon lamp source. In 2010, Strong and Barbizon presented an LED alternative -- which increases energy efficiency and allows for safer, easier, and more cost-effective maintenance -- to the entire design team. This proposal was accepted.

The spire
The spire atop 1-WTC consists of 18 sections of steel and masonry, to a total height of 408 feet. (The photo shows the ascension of the first spire section last December.) The final section, over 100 feet high and weighing 60 tons, will be lifted into place in a single crane operation, probably some time in the last week of April. Gebbie said that the crews will be standing by waiting for precisely perfect weather conditions to pull off the operation.

There has been controversy going back almost a year as to whether the spire should be considered part of the building, for purposes of calculating its height, or alternatively whether it is merely an antenna (which, functionally, it will be). The design originally called for enclosing the steel skeleton of the spire in a white fiberglass shell. The builder argued successfully before the Port Authority of New York and New Jersey to omit the shell, saving $20 million, on the grounds that it would be impossible to maintain. (The building's architects demur, claiming that the issue was settled successfully in the design phase.)

Rethinking it
The omission of the shell presented design issues for Barbizon. Lighting a steel skelton is not the same as lighting white fiberglass. As Gebbie explained in an email:

In order to bathe the entire antenna structure in color changing light, Barbizon and Strong utilized some of the brightest LED outdoor fixtures in the industry to achieve the over 100' throw distance from the roof to the first set of fixtures located on the antenna itself. The remainder of the [spire will be] lit from 6 platforms attached to the antenna.

The beacon
The capstone of 1-WTC's lighting will be a rotating beacon at the top of the spire. The beacon will project light in two opposing directions in a horizontal plane, like a lighthouse. It will rotate once per minute. John Gebbie sent this description of the beacon, developed by equipment suppliers J.R. Clancy and Strong Lighting: "...they developed the energy-efficient LED beacon which uses 50W LED modules, shot into a set of mirrors that concentrate the 288,000 lumens into a 1-degree beam spread, visible from miles away."

Gebbie told me that the manufacturers claim 312,000 lumens output from the beacon. We speculated whether it would be visible from the International Space Station. Probably not: the ISS would need to be positioned edge-on to the beam to see it, and then the beam would need to traverse hundreds of miles of atmosphere.

Once it lights up, the 1-WTC spire will be illuminated from dusk to midnight New York time. A quick back-of-the-envelope calculation suggests that 1-WTC's energy bill for its LED illumination will be roughly 30 times that of the San Francisco Bay Bridge's Bay Lights, or just under $1,000 per night. If anyone would like to make a detailed calculation, I will yield the floor.