In this first installment of a weekly roundup of LED news: transmitting data by room lighting, Zhaga-compliant modules from Samsung, and the world's largest video game in LEDs. 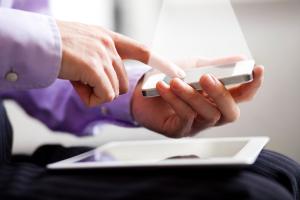 Data by room lighting
The idea of transmitting data via ambient lighting has been around for a while, Here's a 2011 TED Talk in which the University of Edinburgh's Harald Haas introduces the idea. He demonstrates streaming a high-definition video from a table lamp. Last January, the University of Strathclyde announced the formation of the Intelligent Lighting Center to further develop what's being dubbed "Li-Fi."

Now, Fraunhofer's Heinrich Hertz Institute, in Germany, ups the ante with a claim of a theoretical 3Gbps data rate from off-the-shelf LEDs. Applications of such technology leap to mind. As GigaOm concludes:

Connecting our light bulbs to the Internet of Things is one way to make them more valuable. Another way is to make a ceiling lamp that could function as a high-speed broadband link as well as a pleasant illumination source.

Samsung's Zhaga-compliant LED linear modules
Ahead of LIGHTFAIR later this month, Samsung has announced high-efficacy LED linear modules for which they claim a luminous efficacy of 145 lm/W. The press release states that this figure represents "the industry's highest in the LED module product category." The new H-Series modules have achieved Zhaga compliance. They produce light at 5000K and will be available in May. See them at Booth #2645 at LIGHTFAIR International 2013 in Philadelphia.

LED video game on a skyscraper
A professor in Philadelphia had a brilliant idea while staring at the LED lights of a 29-story building in that city. Why not use the LEDs, each one of which has its own IP address (like the Bay Lights), to animate gameplay on a large scale?

Frank Lee co-directs the Game Design Program at Drexel University, so it's natural that thoughts of Pong and Snake came into his mind as he contemplated the massive glass shard that is the Cira Center. Later this month, at the third running of Philly Tech Week, visitors will get a chance to compete using oversized joysticks that control and animate the Cira Center LEDs.

Frank Lee was not the first to have the idea of gameplay using building lights. A year ago, MIT hackers (the good kind) converted the side of a high-rise building into a giant game of Tetris (many more photos here). It turns out that MIT hackers had been discussing playing Tetris on this building since 1993.

Maximizing plant growth with LED "light recipes"
A researcher in New Zealand has been looking at the ways UV light affects the growth of various fruit and vegetable crops. Dr. Jason Wargent of Massey University founded a company, Biolumic Ltd., to develop LED lighting technology that promises to offer tight control over food and crop quality and productivity. The company has received early-stage funding from private and public sources. Trials with local growers of leafy vegetables and high-value herbs are expected to start within the year.

Let us know in the comments whether you find value in the idea of the Monday Roundup.