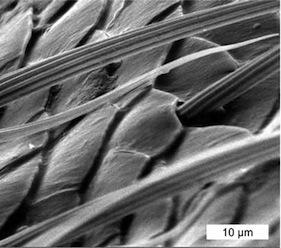 Learning from fireflies
Researchers have increased the light-extraction efficiency of an LED by up to 54 percent after adding an overlayer patterned on a structure found in a Panamanian firefly lantern.

The research group, from Belgium, France, and Canada, found that relatively large-scale (not nanoscale) irregular structures on the cuticle of the firefly lantern let out the most light. They modeled this behavior in software and then demonstrated it by constructing a "factory roof" patterned layer on top of a GaN LED. This overlayer served to improve light extraction into air from the diode's high refractive-index active material. The overlayer was constructed by direct-writing laser lithography.

Other research has looked to fireflies for inspiration on methods to improve light extraction from LEDs, but nanoscale features have been the structures of interest. The work described here is the first to use a micrometer-scale coating, and the efficiency improvement realized is the largest to date.

Two papers describing this work were published by the Optical Society of America.

Philips lighting sales flat, LEDs up 38%
Philips recently released results for the first fiscal quarter of 2013, and they are indicative of trends in the lighting industry. Overall revenue for Philips Lighting was essentially flat from a year previously, but LEDs were up by 38 percent, and now account for 23 percent of the company's lighting revenue. Thus, the gains from the LED boom are offsetting losses in traditional lighting lines. This is how it is going to go for the industry incumbents.

The chip-manufacturing Lumileds division, sponsor of this site, saw double-digit growth in the quarter and is expected to achieve profitability later this year. The rough patch that all LED chip-makers have experienced recently, with a market glut caused by the entry of a large number of Chinese suppliers, may be ending.

Lasing in two colors at once
Last fall, a research group from Arizona State University presented work at a conference, claiming to have achieved "simultaneous lasing in two visible colors at 526 [green] and 623 nm [red] from a single CdSSe heterostructure nanosheet at room temperature." Their paper has just been published by the Institute of Physics, and it is available for 30 days at the link above (free registration is required).

This work does not relate to LEDs, but rather to the earliest precursor of a technology that could ultimately lead to an alternate way to produce white light -- potentially at higher efficiency than LEDs can deliver.

On the lifetime of lamps
Joe Bloggs, lighting expert and publisher of the UK-based Lux Review, has a thoughtful essay in the March issue. It's on page 52, but that simple URL fails to take you there directly in most browsers, though Firefox worked for me. Go to www.luxreview.com and select the March 2013 issue, click Start Reading, then Contents, select Letters on page 50, and hit Next Page.

Bloggs starts off by describing the longest-lasting lightbulb known: it's an incandescent bulb at a fire station in Livermore, Calif., and it has been lit for 105 years. (Guinness affirms the record.) He goes on to describe how we could, if we wanted to, produce LED lights that would last for thousands of years. But what would be the good of that? Bloggs argues that a lifetime of 10 years makes more sense for a consumer product -- as long as the driver circuitry tolerates being switched on and off a sufficient number of times to cover that span.